Who knew the Jehovah’s Witness video of a couple shunning their daughter for life because she dared to think for herself was just the tip of the iceberg? 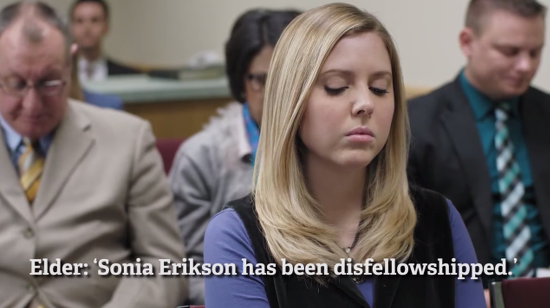 That video is just one of many that practicing JWs will see during their 2016 regional conferences this summer. (You can see the entire conference proceedings, videos and all, at AvoidJW.org)

Lloyd Evans grew up going to these conventions and says this year’s offerings stand alone when it comes to the “sheer scale of manipulation and coercion.”

Evans has a written summary of what the videos show — and why the lessons are so disturbing — right here.

For all we know, Sonja could have been stranded by the roadside, or in the process of being attacked, robbed, raped or murdered — but paramount in her parents’ minds is the need to show loyalty to Watchtower by pretending she no longer exists.

Sonja tells the audience that her parents did the right thing by refusing to pick up, and quotes almost verbatim from an experience printed in a 2013 Watchtower in which a once-disfellowshipped man named Robert praises his parents for not giving him the “small dose” of contact he needed that might have delayed his decision to return. Family contact, apparently, is some kind of illicit drug, and depriving disfellowshipped children of it is the humane, loving thing to do.

Watchtower is virtually holding its hands up and saying: “We expect parents to emotionally blackmail their disfellowshipped kids. If they end up returning just to end the shunning rather than because they genuinely believe the religion, at least the ends justify the means.”

He urges people to share this video so people can see just how cult-like the JWs are:

Perhaps the only way we can ever live to see public opinion close the gap on Watchtower is by doing what we can to give this dreadful material the exposure it deserves in whatever way possible. For that reason, I would urge all of you to share this video and article on social media (if you are able), as well as the videos and articles that will follow in this #worstconventionever series.

Maybe the next time JWs knock on your door, you can just watch these videos together and discuss how unloving the group’s policies are. It’ll be entertaining for everyone.