On immigration and the refugee crisis in Europe, what distinguishes Buddhist superstar Tenzin Gyatso, better known as the Dalai Lama, from right-wing populists like Donald Trump or Geert Wilders?

At first blush, not much. 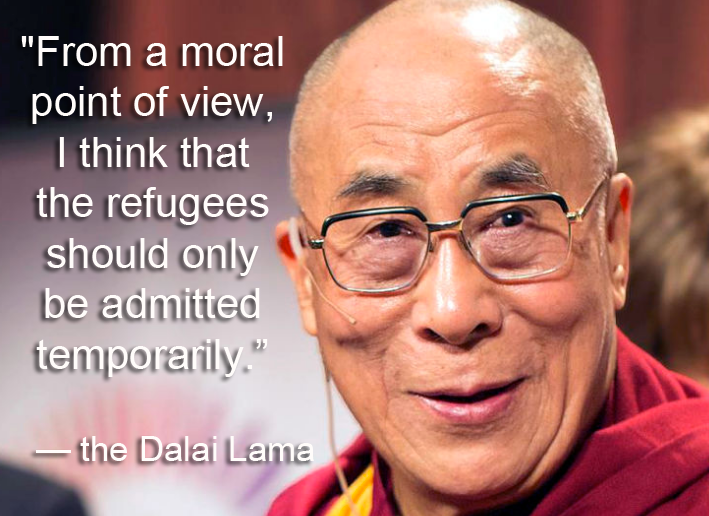 Speaking to German reporters in the de facto capital of Tibet’s exiled government, the Dalai Lama apparently said that “too many” refugees are seeking asylum in Europe. “Europe, for example Germany, cannot become an Arab country,” he said with a laugh, according to AFP … “Germany is Germany. There are so many [refugees] that in practice it becomes difficult.” …

“From a moral point of view, too, I think that the refugees should only be admitted temporarily,” the Dalai Lama said.

It was an unexpected extension of sympathy for a sentiment that has found fertile ground mostly among nationalist groups.

The Washington Post notes that the Dalai Lama (who his followers have formally renamed “Holy Lord, Gentle Glory, Compassionate Defender of the Faith, Ocean of Wisdom”),

… often speaks of humanity’s need to acknowledge its “oneness” …

… and that he is a refugee himself. However,

[T]he Dalai Lama did convey his characteristic compassion. “When we look into the face of every single refugee, especially the children and women, we can feel their suffering,” he said.

But then he went right back to his immigrants out stance.

“The goal should be that they return and help rebuild their countries.”

It’s the second time in nine months that the Dalai Lama, often seen as a hyper-enlightened humanitarian, has confounded the expectations of his fans. Last September, in an appearance on the BBC, he was asked whether his successor could be a woman. While he answered in the affirmative, he added that she’d only be useful if she was “very attractive.”

I can’t wait to hear what he”ll blurt out next. Maybe something about same-sex relationships constituting sexual misconduct?

(Image by Christopher Michel via Wikipedia)

June 3, 2016
Little League Coach Gets Jail Time for Spanking Players' Rear Ends Just Like God Told Him To
Next Post