Please Stop Assuming That People With a Lot of Children Must Be Religious June 3, 2016 Terry Firma

My wife and I have three kids, a fact that a commenter on these boards recently saw as an occasion for a joke — something along the lines of “They know what’s causing those now.” Har har.

No malice or hostility was intended, but it felt pretty weird to have a total stranger on the Internet voice an opinion about our presumed propensity to procreate. (All three of our children are in fact adopted.)

If having three kids draws occasional comments, you can imagine what couples with four or six or nine children get to hear. 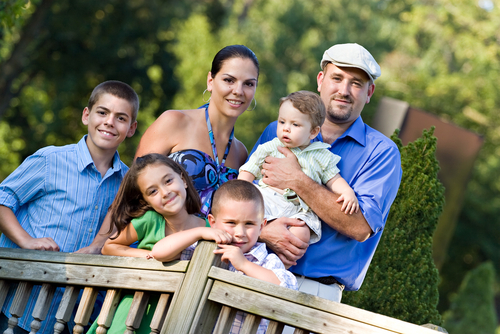 The Washington Post has a piece about large families who automatically get pigeonholed as religious by Christian and secular Americans alike. The threshold number of offspring appears to be four, in the experience of one mother:

“[A]s soon as we had four, people assumed we were very religious,” Lindsay Bartleson said. Now she and her husband, who describe themselves as a secular humanist and an agnostic, are up to five kids. “People assume. They’ll come up and start talking about God to us. Which is a little awkward at times.”

Other secular families with a lot of children face related challenges.

Raising seven children who range in age from 6 months to 16 years old, [Tracey] Stoner has sought advice in Facebook groups for large families. But the members seem to be “95 percent Christians,” she said, often with fundamentalist ideologies. “Sometimes I’ll post a photo of my family. They’ll see a picture of my daughter where she’s wearing shorts and a shirt. They’ll blast me for that,” Stoner said. “Because she’s not wearing a dress.”

I think we could all do with less of others’ smug opinions about our personal lives. That goes for Christians presuming to tell us how we should raise — and dress — our children, as well as for religionists and secularists who wish to tell everybody when to stop having more.

Stoner is now the co-admin of a Facebook group catering to non-religious large families. Members report getting frequent crude comments about the size of their clan.

“We hear, ‘Oh, you should stay away from your wife.’ ‘Don’t you know how they’re made?‘” Bartleson said. Stoner said she hears the same: “We get a lot of ‘Do you have a TV?’ or ‘Do you know what causes that?’”

Oh goodie, so I’m not the only one who gets treated to such witticisms.

Bartleson says a particular TV family has helped mark large families as apparently religious. “When people gasp when they hear I have five, I automatically feel like I have to say, ‘I’m not a Duggar.’”

The Post also looked at the demographics and reports that

So how do the non-religious stack up compared to religious people? Not so differently. Twelve percent of “nones” — the rapidly growing group of Americans who identify their religion as “nothing in particular” — have had at least four children.

As long as the kids are fed, educated, and loved, that’s nothing to be proud or ashamed of either way.

In fact, if we really believe in a woman’s right to choose, we can’t very well scoff at Tracey Stoner’s and Lindsay Bartleson’s choice to have largish families. The same goes for non-secular parents with more than a couple of children.

I’ll leave you with my favorite Billie Holiday song.