For some reason, Beebe, Arkansas Mayor Mike Robertson sent a letter to residents urging them to come out for the city’s big Fourth of July celebration. It’ll be one hell of an event… if you love Jesus: 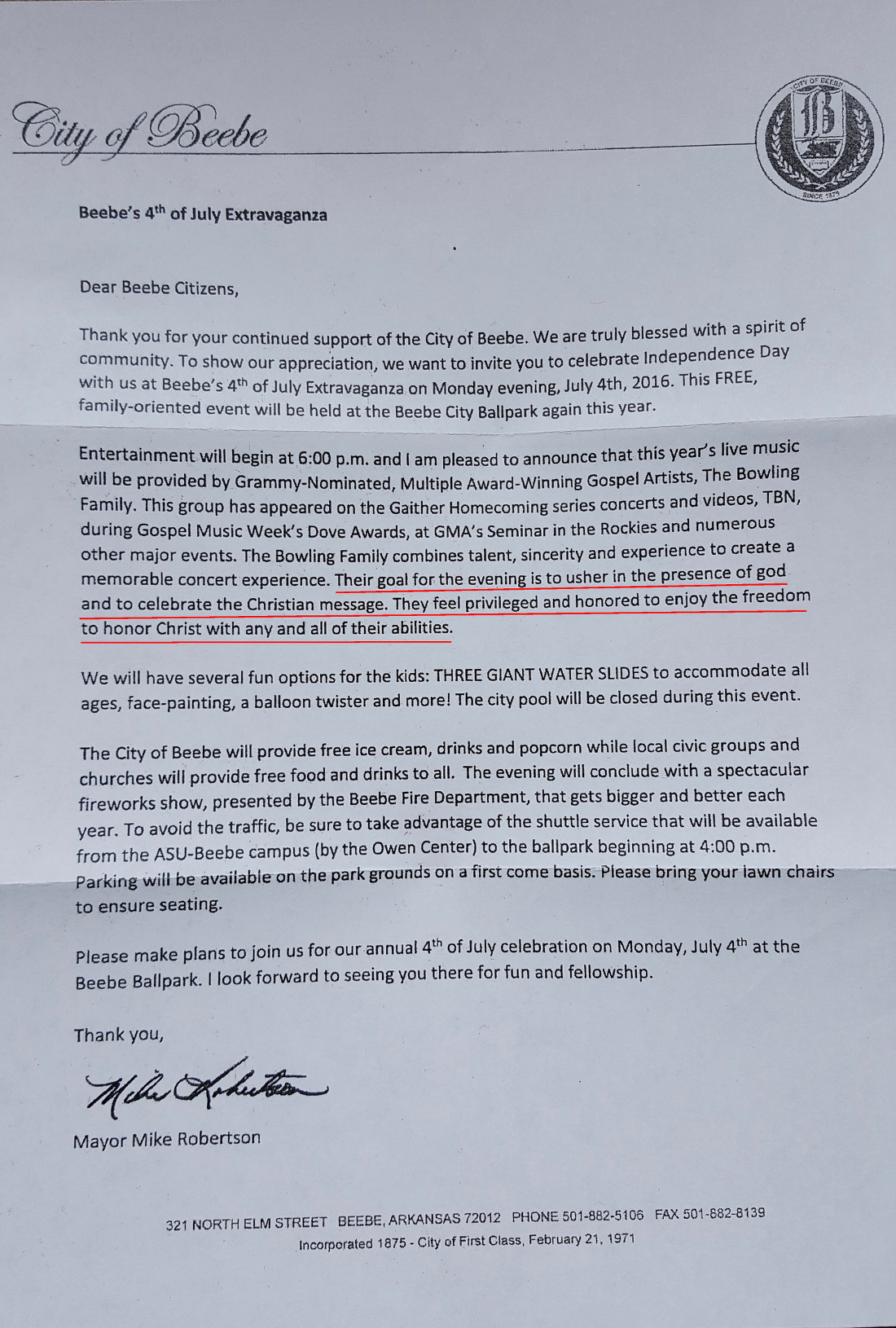 … I am pleased to announce that this year’s live music will be provided by Grammy-Nominated, Multiple Award-Winning Gospel Artists, The Bowling Family…

The Bowling Family combines talent, sincerity and experience to create a memorable concert experience. Their goal for the evening is to usher in the presence of god and to celebrate the Christian message. They feel privileged and honored to enjoy the freedom to honor Christ with any and all of their abilities.

This wouldn’t be acceptable in December; why is it okay in July?

The mayor may argue that these aren’t his views, just those of the band members. But if the band is known for playing Gospel music, designed to honor Jesus, the same rules apply. The city (and taxpayers) shouldn’t be paying for entertainment that promotes one specific religion.

The American Humanist Association’s Appignani Humanist Legal Center wants to know what went into this decision — and attorney David Niose just sent city officials a letter asking for more details, urging them to reconsider their plans if the assumptions are accurate:

You should not be surprised that some of your constituents object to your use of the apparatus of government, which of course is funded by citizens of various religious backgrounds, to endorse and promote your personal religion.

Not all citizens of Beebe are Christian, and it is simply inappropriate to use taxpayer resources to sponsor a city event featuring musicians whose message and purpose are, as you admit in your own words, unquestionably intended to promote Christianity. This planned Gospel performance should be moved to a church or other private venue, and its city sponsorship should be removed.

It’s not the first time this city has promoted Christianity. A couple of years ago, a local Pagan wanted to open a temple in the area. That ended when his religion was made public, with one alderman saying, “that man’s God isn’t my God,” as if that was a legitimate excuse to deny the man what he wanted.