Everybody needs a hobby. Turkish president Recep Tayyip Erdoğan‘s passion appears to be harassing critics with a mountain of defamation lawsuits that I reckon is unprecedented in the history of the world. 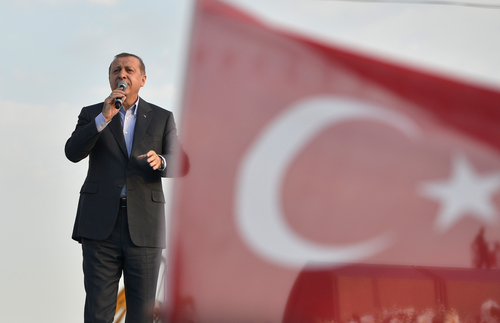 Since becoming president in 2014, Erdogan has filed close to 2,000 defamation cases under a previously seldom-used law that bars insulting the president.

He became president at the end of August, two years ago (after having been Turkey’s prime minister for a dozen years). That would mean that in those 21 months, assuming weekends off, Erdoğan sued an average of four and a half critics a day.

Free speech advocates say the law is being used aggressively to silence and intimidate critics. The trials have targeted journalists, academics, and even schoolchildren. Coupled with a crackdown on opposition media and journalists, the trials have sounded alarms over the erosion of rights and freedoms in a country that was once seen as a model of Muslim democracy.

The latest scofflaw to be dragged into court was 27-year-old model and former Miss Turkey Merve Buyuksarac — we wrote about her here. Yesterday, a Turkish judge

… gave her a 14-month suspended sentence, amid deepening concerns that the country is swaying toward an increasingly authoritarian form of rule. The court in Istanbul found [Buyuksarac] guilty of insulting a public official but immediately suspended the sentence on condition that she does not reoffend within the next five years.

Buyuksarac, who was crowned Miss Turkey in 2006, was briefly detained last year for sharing a satirical poem on her Instagram account in 2014. Prosecutors deemed it to be insulting to Erdogan, who was still prime minister at the time.

The constitution of Turkey guarantees freedom of expression, but eleven years ago, the country’s penal code was amended to criminalize those who insult Turkey, the Turkish nation, or Turkish government institutions.