Ken Ham: The Cincinnati Zoo Gorilla Incident Reminds Me of Abortion and Jesus

Ken Ham has finally weighed in on the weekend incident at the Cincinnati Zoo, in which a gorilla (Harambe) was killed after a three-year-old fell into its enclosure. Experts say that zoo officials made the right call in shooting the animal — the boy’s life was in serious danger — and Ham agrees with that assessment. 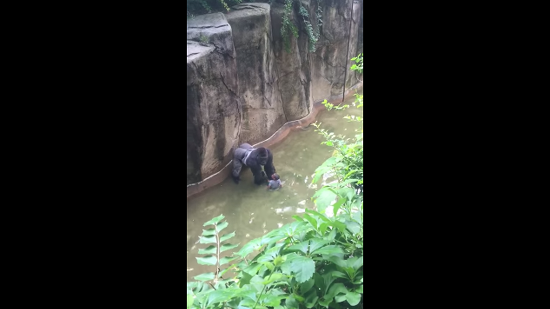 But not before noting two things about abortion and Jesus. Because Christians like him have no other interests.

Ham said of the people mourning the death of Harambe:

It’s also a reminder to me of the people who complain about an animal dying but inconsistently support or condone the murdering of 58 million children by abortion in America since Roe v. Wade!

Yes, we can be upset about the loss of an animal (even if we agree zoo officials did the right thing). But no living being is the same as a barely fertilized egg. Considering that more than 90% of abortions occur in the first trimester, we’re not talking about “children” in any sense of the word. Ham is making a false equivalence because he doesn’t know and doesn’t care about facts. It’s a habit with him.

He also commented on the boy whose life was saved:

And while it is sad that such a magnificent animal had to die, I praise God that the boy — who is made in the image of God — was saved from the gorilla. We hope that as the boy grows up he will be saved by the Lord Jesus Christ for eternity in heaven.

Just be grateful that he’s okay and leave it at that.