After writing books about why you’d want to be an atheist, how to come out as one, and how to deal with death, it seems appropriate that Greta Christina‘s latest book is about how to live your life without God. 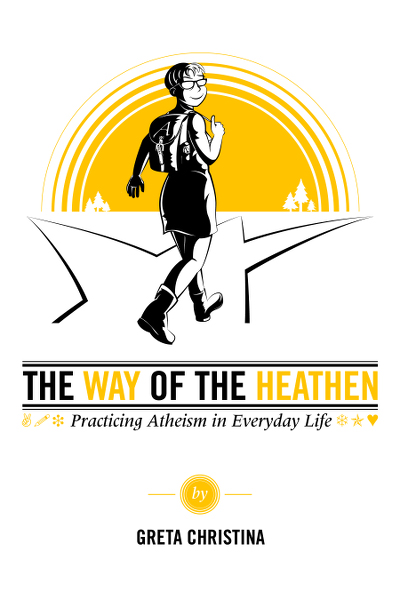 In the excerpt below, Greta talks about the meaning of life:

If there are no gods and no universal consciousness, and human existence
is an infinitesimal eyeblink in the vastness of time and space — what the heck is the point?

When atheists point out that the universe is huge, inconceivably old, largely inhospitable to human life, and utterly uncaring, it can seem like a downer. Of course, the hardass response is, “Tough cheese. Suck it up. Reality doesn’t care if it hurts your feelings.” But is there a more compassionate, joyful answer, that doesn’t amount to “Life sucks, then you die”? Yes, human life is basically an unusual chemical process on a hunk of rock, orbiting one of a hundred billion stars in one of a hundred billion galaxies. It’s only been around for about two hundred thousand of the universe’s fourteen billion years, and it’s pretty much guaranteed to end within the next billion, while the universe expands into mostly nothingness. Your soul isn’t going to live forever, and there’s no god or world-soul animating the universe who cares about your little contribution. In this universe, is it possible to find meaning and joy?

Yes. But it means letting go of a big chunk of ego.

When we let go of religion, our lives can still have meaning. We just have to let go of it having meaning on an immense, universal scale. We have to let go of the arrogant belief that the architect of the universe cares what we do. We have to scale down the sense of where our life is lived, down from the cosmic eternal scale, and onto a finite human one. Yes, the human scale is small. That doesn’t make it less real.

Let’s pretend that quarks and other subatomic particles have consciousness. Now, think about the quarks in the atoms of your index finger. To them, you would be as big as the galaxy is to you; as big as the universe, if I’m doing my math right. And the atheist quarks might be having identity crises because they’ve realized the finger doesn’t care about them and doesn’t know even know who they are, and their existence is on a miniscule scale compared to the fingerverse. But the subatomic scale is still real. It’s still important.

It’s a mistake to think size and longevity are the truest measures of importance. A five-minute dance in the park can be more important than an old parking lot that never gets demolished; a half-second with a lover can be more important than a boring job you slogged through for twenty years. Fleeting moments are as valuable as stone monuments. Fleeting moments are all we have. We should make the best of them.

In fact, when we let go of the idea of a creator or a world-soul, the whole question of which scale is important becomes moot. Without gods, the question gets reframed: Important to whom?

In a world without gods, who cares about us? We do. We care about ourselves, and we care about each other, the other flawed, confused, messy animals living on the same mortal scale. There’s no immense, eternal, perfect being watching our every move, elated at our triumphs and devastated by our failures. We matter because we matter to each other, in our own short time span, on our own small scale. We make each other important.

Being an atheist doesn’t mean life isn’t important. It means we make our own importance. The human scale is where we live. It’s what we have. And if we decide that’s the most important scale, there’s nobody out there to tell us otherwise.

The Way of the Heathen is now available on Amazon.

June 1, 2016
Bible-Loving Dad Is Accused of Shackling Teen Daughter in Basement, With a Bucket For a Toilet
Next Post