A new full-page ad in the New York Times (Thursday), USA Today (over the weekend), and the Washington Post (Sunday) will highlight an atheist’s lawsuit against the U.S. House for denying him the opportunity to deliver a secular invocation. 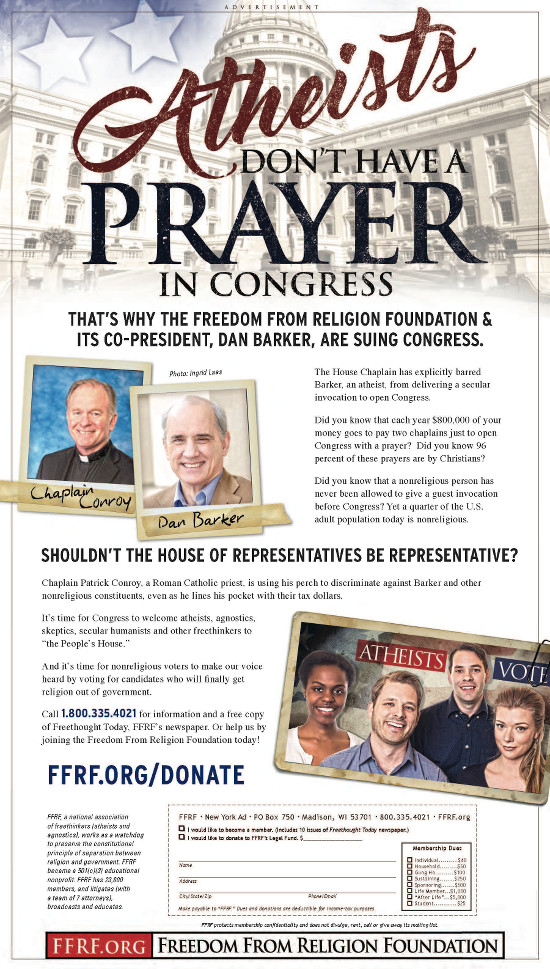 Dan Barker, co-President of the Freedom From Religion Foundation, filed the lawsuit last month after his rejection despite getting an elected official to sponsor him, submitting his ordination paperwork, and sending in a draft of his speech.

The ad in question calls out the chaplaincy and Chaplain Patrick Conroy specifically:

The House Chaplain has explicitly barred Barker, an atheist, from delivering a secular invocation to open Congress.

Did you know that each year $800,000 of your money goes to pay two chaplains just to open Congress with a prayer? Did you know 96 percent of these prayers are by Christians?

Did you know that a nonreligious person has never been allowed to give a guest invocation before Congress? Yet a quarter of the U.S. adult population today is nonreligious.

Chaplain Patrick Conroy, a Roman Catholic priest, is using his perch to discriminate against Barker and other nonreligious constituents, even as he lines his pocket with their tax dollars.

It’s time for Congress to welcome atheists, agnostics, skeptics, secular humanists and other freethinkers to “the People’s House.”

And it’s time for nonreligious voters to make our voice heard by voting for candidates who will finally get religion out of government.

Will it change anything? Who knows. But the more people aware of this issue, the better.