Women are baby-makers who can never be the equals of men, says Turkey’s Dear Leader. 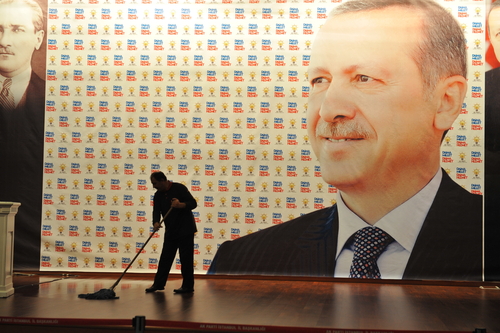 Turkish President Recep Tayyip Erdogan has called on Muslims to reject contraception and have more children. In a speech broadcast live on TV, he said “no Muslim family” should consider birth control or family planning.

“We will multiply our descendants,” said Mr Erdogan, who became president in August 2014 after serving as prime minister for 12 years. His AK Party has its roots in Islamism and many of its supporters are conservative Muslims.

In Monday’s speech in Istanbul, the Turkish leader placed the onus on women, particularly on “well-educated future mothers,” to not use birth control and to ensure the continued growth of Turkey’s population.

According to RT News, Erdogan also said that

“Nobody can interfere in God’s work. The first duty here belongs to mothers.”

While urging his compatriots to protect the family, the president insisted that “women are not equal to men.” “Our religion [Islam] has defined a position for women: motherhood,” the Guardian cited Erdogan as saying at a summit on justice for women in Istanbul. … “You cannot explain this to feminists because they don’t accept the concept of motherhood,” Erdogan added. Women and men are not equal “because it goes against the laws of nature” and [disregards] differences in their “characters, habits and physiques.” …

In December last year, Erdogan dubbed birth control a form of treason threatening the nation’s bloodline. Moreover, he believes any married couple should have at least three children in order to boost the Turkish population.

“For years they committed the treason of birth control in this country, seeking to dry up our bloodline. Lineage is very important both economically and spiritually,” Reuters cited Erdogan as telling a couple after serving as a witness at their wedding.

I wonder if Erdogan, who has fought for a dozen years to get Turkey admitted to the European Union, is finally grasping the futility of that effort. These days, he certainly sounds like he has dispensed with all the diplomatic niceties one would expect of a modern European leader.

That should be a relief to citizens of the E.U., but I’m sure it’s a deep concern for the millions of Turkish progressives who just can’t seem to get rid of this Teflon blatherskite.

May 31, 2016
After Jehovah's Witnesses Try to Convert Grieving Woman, She Knocks on Their Door for Answers
Next Post

May 31, 2016 Head of German Protestant Church Wants to See Islam Taught in Nation's Schools. Should It Be?
Browse Our Archives
What Are Your Thoughts?leave a comment