Some Cities in the West Now Bow to the Religious With Gender-Segregated Swimming in Public Pools May 31, 2016 Terry Firma

On most Saturday mornings, I take my youngest daughter to the Y for swim class. While she’s in the water, I sit on the bleachers and watch her, and chat with other parents.

Doing so makes me a perv in the eyes of some Muslim men. Or at least, they’d object to my presence if their daughters or wives were in the water, too. If I lived in Canada, or Sweden, and my daughter and I went to a municipal pool, I just might be told to scram — just because I’m a guy. 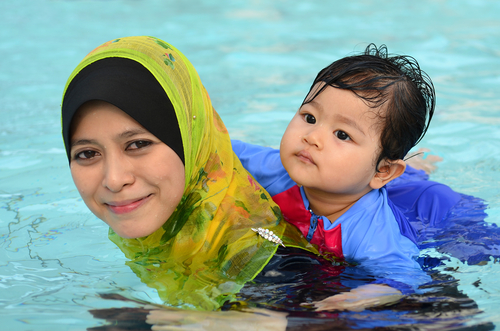 The same restrictions could keep me out of a public swim facility in Brooklyn, New York, that, in catering to Jewish clientele, dedicates its pool to women only on four days of the week, for a total of seven hours. It’s to promote “modesty,” which also means that

While the Brooklyn gender-segregated swim hours are controversial, and the initiative there may soon be shut down, the Swedes are just getting started (though there are plenty of nay-sayers among them).

Via the Christian Science Monitor:

[M]any [are] calling the move [to have gender-segregated swim schedules] regressive and a ghettoization of women, while others laud it as a sensible inclusion of the country’s increasingly diverse population. This month Sweden’s democracy minister, Alice Bah Kuhnke, told Swedish TV that gender-segregated swimming hours … are problematic, and called mixed-gender swimming “a victory after many years and generations of gender-equality struggle.”

In Malmö, Iva Parizkova Ryggeståhl and her fellow members of the local International Women’s Association have spent a great deal of time talking about gender-separated swimming. At first, they weren’t sure how to feel about it, but now they’ve decided they’re opposed to it. “Men who are not comfortable being in the same swimming pool as women should not be there,” Ms. Parizkova Ryggeståhl argues. “And we women shouldn’t care whether men are looking at us in the swimming pool or not, and whether they get jealous or not.”

By contrast, supporters of gender-separated swimming hours maintain that without the separation Muslim women would never get a chance to swim.

Sorry — isn’t that a problem of Muslims’ own making? Why expect the rest of us to solve it by abandoning or bending our (secular) values?

So Muslim women would “never get a chance to swim”? Well, if my local pool went women-only on Saturday mornings, neither would my daughter. I usually can’t make it there on Sundays or on a weekday, so I guess she’d be shit out of luck if that happened. She’s still learning to swim, and I have to say it upsets me that her progress in the pool could be retarded under such a — for now hypothetical — scenario. If, as a society, we have to choose between making kids safe in the water, and accommodating religionists with ancient hangups about so-called “modesty,” I’d pick the former any day of the week.

Even if it isn’t about something as charged as keeping kids from drowning, I’m still going to favor mixed-gender swimming during all opening hours. In case you’re on the fence about the issue, please do the following thought experiment:

Would you support segregated swimming if the group demanding to be accommodated was made up of conservative Christians, with their puritanical notions about female flesh?

If you answered no to that, you’d have to logically also reject such initiatives for Muslims and Jews, right?

Qaali Shire, a Muslim Somali mother of three, who lives in Malmö and was recently granted asylum, … [says that] gender-separated swimming hours are good for husbands, too, … because they don’t have to feel uncomfortable over their wives swimming in front of other men. “Even if you swim in your pajamas, your husband won’t like it,” she explains.

Again, I fail to see how that’s my problem. Because I have an outie, I should be treated like I’m Glenn Quagmire, always ready with a giggity and a boner? That’s pretty demeaning.

And it seems to me that segregated swimming hours codify discrimination against men,

… as men are banned from women’s swimming hours but women can swim when they like.

I prefer a culture and a country in which men and women are treated the same way. We may not be there yet, but we were headed in the right direction. This regressive nonsense drags us back.

George Orwell‘s droll but chilling phrase that “some are more equal than others” is probably best seen as a warning — not as a blueprint for social policy.

=-=-=-=-=-=-=-=-=-=-=
UPDATE, 2 p.m.: I learned that San Diego, too, has a pool with women-only swim time, to accommodate Muslim patrons. According to this story, the initiative takes place after the pool officially shuts down for the day, so at least men don’t get kicked out during regular business hours.

P.S.: Commenter anna says she came across an online Muslim forum whose participants acknowledged that a local pool had women-only hours, but some of whom complained

…that there were no ‘Muslim women only’ sessions, as it is, apparently, not Islamic for a Muslim woman to reveal her body to non-Muslim women. So it is not only men who are regarded as perverts by Muslims.

That bulletin-board conversation is here. As you might expect, it’s not uplifting reading.

May 31, 2016
Why Did This School Board Chair Brag About Hiring Principals Who "Loved the Lord"?
Next Post