Head of German Protestant Church Wants to See Islam Taught in Nation’s Schools. Should It Be? May 31, 2016 Terry Firma

Head of German Protestant Church Wants to See Islam Taught in Nation’s Schools. Should It Be?

[Update: This post was slightly edited after publication to correct the erroneous impression that all German students would be taught Islamic theology. The bishop’s proposal pertains to Muslim students only.]

I don’t have the answers, but I sure have a lot of questions.

Should Muslim pupils in Germany’s state schools get educated in the tenets of Islam? If so, what version of Islam is the correct one that schoolchildren must internalize? Sunni Islam? Shiite Islam? Salafi Islam? Wahhabi Islam? Ahmadiyya Islam? Sunni Islam alone has five main sub-sects (Hanafi, Maliki, Shafi’i, Hanbalites, and Ẓāhirī), and all those f(r)actions have splinters. Who will decide, for the purposes of German schools, what the proper theology is? 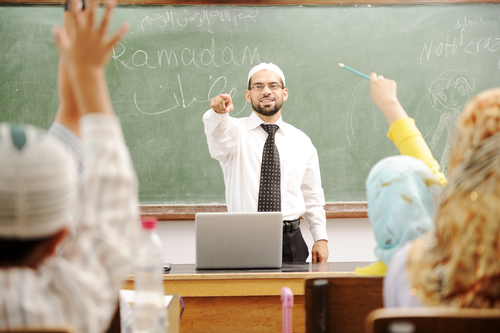 The head of the Protestant Church in Germany has called for Islam to be taught in state schools across the country as a way to make young Muslims impervious to the “temptation of fundamentalists.”

May pupils who want no part of it simply opt out?

Bishop Heinrich Bedford-Strohm told the Heilbronner Stimme newspaper that teaching Islam in schools nationwide would give Muslim pupils a chance to take a critical approach to their own religion. … Germany has about four million Muslims, about five percent of the total population.

And who does Bedford-Strohm suggest to set the Islamic curriculum?

He said Islamic associations in Germany should be responsible for these courses and hoped they would organize themselves to be a “clear partner” for the German state.

So are the kids going to be taught that Allah is the way, the truth, and the light, and that Islam is the religion of peace? Or will they hear what is actually in the Qur’an, unfiltered, including the exhortations to smite unbelievers at their necks, to use violence in the service of piety, to sever the hands and feet of mischief-makers?

Unfortunately, the groups who are to be tasked with the Islamic education are known for theological and political battles:

[T]here have been recent rivalries and disputes among Islamic associations, which have complicated efforts to manage religious instruction for Muslims in some areas.

Does this plan have any chance to achieve its goal of reducing the appeal of violent jihad? Or is the bishop unwittingly constructing a Trojan horse, to be unleashed on all Germans?