After Jehovah’s Witnesses Try to Convert Grieving Woman, She Knocks on Their Door for Answers May 31, 2016 Hemant Mehta

After Jehovah’s Witnesses Try to Convert Grieving Woman, She Knocks on Their Door for Answers

Jean Sergent-Shadbolt‘s roommate, Michael Boyes, died a few months ago. She was devastated, as you might imagine. And she said as much to a member of the Jehovah’s Witnesses, who knocked on her door a few weeks later.

But the New Zealander was royally pissed off when, exactly three months after Boyes’ passing, she received a handwritten letter from the Witnesses all about how the religion could help her deal with questions about death. 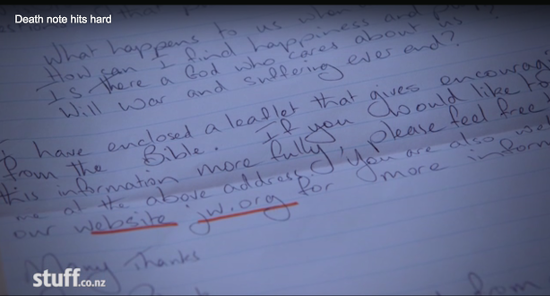 She felt that was a step too far, trying to convert someone who was so vulnerable. It was downright “predatory,” she said.

And so she decided to follow the return address, knock on their door for once, and get some answers.

You can see how that played out right here.

Without giving much away, the Witnesses said it was purely coincidental. But it wouldn’t have been the first time a religion has preyed on grieving people. They rationalize it by saying they’re only trying to help, not realizing that it’s not helpful when you’re asking people to give up their critical thinking skills in order to follow your brand of nonsense.

(Screenshot via Stuff.co.nz. Thanks to Sid for the link)

May 31, 2016
Some Cities in the West Now Bow to the Religious With Gender-Segregated Swimming in Public Pools
Next Post

May 31, 2016 Turkish President Urges Muslims To Ditch Birth Control, Says Family Planning Is Like "Treason"
"I decided to teach myself to make an ethnic cuisine during Covid. I picked an ..."
Maltnothops Christian Lawmaker Threatens to Dox Reporter ..."
"Should, should, should. Why do you think you know better than women what they should ..."
San_Ban Richard Dawkins: It’s “Wise and Sensible” ..."
"https://www.youtube.com/watch?v=OoCkUBro4zY"
Zizzer-Zazzer-Zuzz Leader of “Love Has Won” Cult ..."
"What a maroon. Doesn’t he know that there’s no such thing as bad publicity."
Maltnothops Christian Lawmaker Threatens to Dox Reporter ..."
Browse Our Archives
What Are Your Thoughts?leave a comment