In Old Video, a Former Producer of The 700 Club Sheds Disturbing Light on Pat Robertson May 30, 2016 Hemant Mehta

In Old Video, a Former Producer of The 700 Club Sheds Disturbing Light on Pat Robertson

Atheists United, a group based in Los Angeles, has been uploading a lot of old lectures onto YouTube. One that caught my eye was given by Gerard Straub.

Straub was a former producer of Pat Robertson‘s The 700 Club but it wasn’t long before he “became disillusioned with that brand of theocracy.” He eventually wrote a book called Salvation for Sale, a tell-all about Robertson. You could argue how much impact it had since Robertson is still on TV today, doing much of the same schtick as always, but he certainly doesn’t have the political power he once did. If anything, he’s a joke, a relic of an age when televangelists were taken seriously.

The lecture was delivered in 1995 at a meeting of Americans United for Separation of Church and State. It begins at the 5:47 mark. 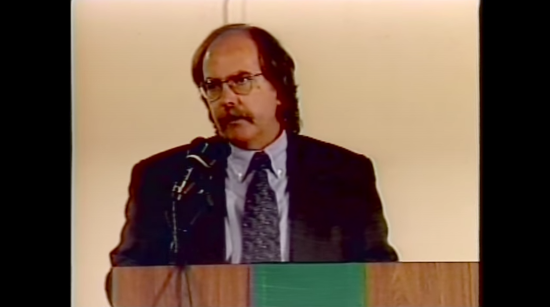 May 30, 2016
Texas Militia Group Dips Bullets in Bacon Grease or Pig's Blood To Fight the Coming Muslim Takeover
Next Post

May 30, 2016 The Problem with the Saying "There Are No Atheists in Foxholes"
Browse Our Archives
What Are Your Thoughts?leave a comment