A Student’s Christian Prayer at Graduation Last Year Means No Formal Prayer For Anyone This Year May 30, 2016 Hemant Mehta

When the students at Pottsgrove High School in Pennsylvania have their graduation ceremony in a couple of weeks, a formal prayer won’t be part of the program. And for that, we can thank a student who led the audience in a very explicitly Christian prayer last year: 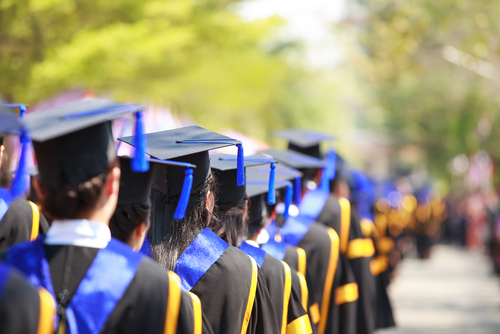 “The decision [to have no invocation or benediction] was made after last year’s graduation when a student went off script from the nondenominational prayer that has been done over the years and turned it into a very Christian prayer,” said school board President Rick Rabinowitz.

“It was offensive to someone else in the audience and it was reported to me that it was offensive and religious in nature and that we should stop it,” said Shellie A. Feola, superintendent.

Beautiful. The nondenominational prayer was bad enough, but because a kid couldn’t help but use the public platform to promote his faith, there won’t be any prayer whatsoever.

And just to add insult to injury, there won’t be a baccalaureate ceremony either:

… though there was baccalaureate last year, there will not be one this year. But not because of the district.

This year no students or church group stepped forward to sponsor the service, officials said.

Maybe the local churches assumed the regular graduation would be Christian enough for everybody?

In any case, students and parents are welcome to pray on their own before, after, or silently during the ceremony. As we know by now, though, some Christians won’t be satisfied unless they can say their prayers out loud for everyone to hear, because no one else’s enjoyment of the event matters to them.

May 30, 2016
Parishioners Sic a Private Eye On Their Priest To Dig For Evidence of Gayness and Corruption
Next Post