Walmart Shopper Assaults Father Who Brought His 5-Year-Old Daughter Into the Men’s Room May 28, 2016 Hemant Mehta

Given the hateful rhetoric of the Religious Right when it comes to trans people using gender-appropriate bathrooms, it’s hardly surprising that some people are freaking out over the subject. But that fear is now crossing over into even innocuous bathroom incidents.

When Utah father Christopher Adams (below) was out shopping at a Walmart this past weekend with his daughter and son (ages 5 and 7, respectively) and they both had to use the bathroom, the easiest thing to do was take them with him into the men’s room. 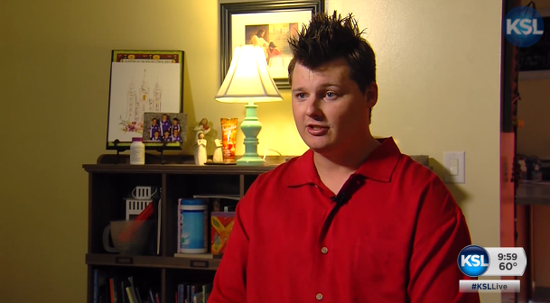 But one shopper, unable to handle a girl in the men’s room, took the law into his own hands:

“He came in and we finished washing our hands and it escalated really fast,” he said.

“What the fuck is she doing in here?” the man said, according to Adams. “It is inappropriate that she’s in here.”

That led to a literal fist-fight until cops could take the man away. (Adams said his kids locked themselves in a stall until the fight was over and were uninjured, albeit shaken up.)

Why did the man come after him?

“I don’t know what he was freaking out about,” Adams said. “The only thing that makes sense in my head at the the time was whole Obama thing with forcing transgenders to use bathrooms.”

Adams never thought too much about that issue before, but taking his kids into the bathroom with him never struck him as odd. And it shouldn’t. That’s the most convenient option for parents in many instances.

We don’t know the assailant’s name. We don’t know what religion he is. We don’t know what media he consumes or whose voices he takes seriously. But it sure wouldn’t surprise me if this was a case of someone taking faith-based fearmongering far too seriously. After all, if you believe what many conservative Christian leaders say — that allowing trans people into the correct bathrooms is just a gateway to pedophilia and perversion — then any girl using a men’s bathroom has to be wrong, right?

I’ll be quick to apologize if I’m wrong about my assumptions here. But for now, this seems like a direct consequence of the bathroom bills many Christian activists are pushing.

(Screenshot via KSL. Thanks to Scott for the link)