In Malaysia, the religion of peace has slowly gone from a toehold to a chokehold. Via Reuters:

Prime Minister Najib Razak’s government threw its support in parliament this week behind an Islamic penal code that includes amputations and stoning, shocking some of his allies and stoking fears of further strains in the multi-ethnic country. 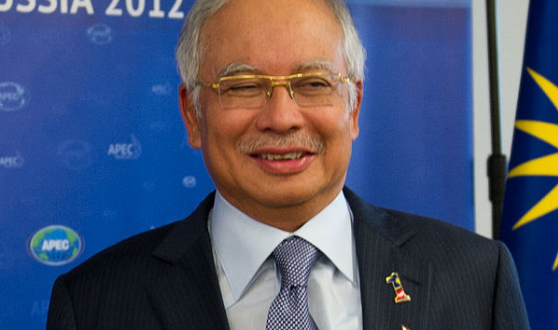 Critics believe the scandal-tainted prime minister is using ‘hudud’, the Islamic law, to shore up the backing of Muslim Malay voters and fend off attacks on his leadership ahead of critical by-elections next month and a general election in 2018.

The Islamist party PAS is pushing for a constitutional amendment that would allow hudud to be implemented in Kelantan, a northern state where nightclubs are banned and there are separate public benches for men and women.

If there’s any irony in the Prime Minister’s embrace of hudud, it is that he could theoretically end up without hands as a result. In the Qur’an, 5:38-39, Allah commands that when a thief is caught, the executioner should

… cut off his or her hands.

Well, funny story. Last year, an exposé in the Wall Street Journal demonstrated that Najib most likely stole the equivalent of 700 million dollars from government coffers.

I’m going to go out on a limb here and assume that the Islamic penal code is strictly for the little people, and that Najib and his wife will continue to enjoy both their ill-gotten gains and the full use of their extremities. After all, what good is $130,000 worth of Chanel handbags if you don’t have hands?

May 28, 2016
British Writer Asserts Without Facts That Religious Believers Are Still a Majority in Her Country
Next Post