Organ Recipient: My New Kidney, Donated by a Young Man Who Died in a Fire, Is Part of God’s Plan May 27, 2016 Hemant Mehta

Organ Recipient: My New Kidney, Donated by a Young Man Who Died in a Fire, Is Part of God’s Plan

Laurie Vargo-Wilke has been on dialysis for two years and was in desperate need for a new kidney, but a transplant was nowhere to be found. That changed earlier this month, however, when a donor — a perfect match, finally — came through: 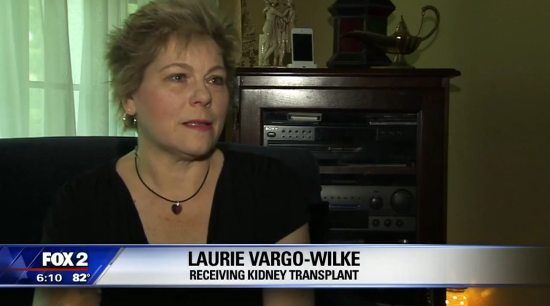 “They told me also when he got his first license he signed up to be an organ donor and he was really proud of that. He went around the house showing everybody that he was an organ donor,” Laurie said.

The surgery will take place soon and I sincerely hope she recovers without any serious complications.

But one thing she said really stands out in the story:

“I’ve never been a real religious person but with these last few days, with hearing about the accident and the turn of events and how everything came and that he’s a match and he was an organ donor — it’s like god had a plan,” she said.

God had a plan for her!

And that plan apparently involved a young man dying from the aftermath of a fire:

A friend of her 21-year-old son, Joshua, was badly hurt in a fire and was on life support. Years ago, he signed up to be an organ donor and he was [a] match.

His parents knew his wishes and before taking him off life support, they thought of Laurie and reached out to her kidney transplant coordinator.

I’m sure Joshua would have wanted to know what Plan B was… God’s Plan always turns out well for the survivors, but plenty of people get thrown under the bus in order to execute it.

I also don’t think it’s a problem to point all of this out. After all, if you want to say something is part of God’s Plan, it’s only fair to look at the entire blueprint.

In any case, all of you should be organ donors. If you’re not, please sign up to become one.

May 27, 2016
Louisiana Attorney General on Trans Rights: "The Good Lord Doesn’t Build Us in That Particular Way"
Next Post