A Georgia Mayor Can’t Decide if a War Memorial with 79 Crosses is an Endorsement of Christianity May 27, 2016 Hemant Mehta

Here’s a simple question: If you see crosses on the ground (like in the picture below) as part of a memorial for veterans, what comes to mind? 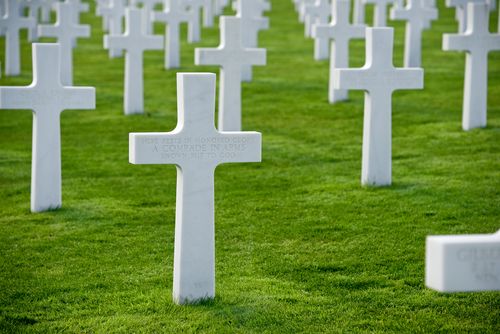 I think most reasonable people would say Christianity has something to do with it.

But that never seems to cross the minds of Christian activists. For them, the relationship between the Christian symbol and the Christian faith is totally coincidental.

That’s the center of a dispute in Hiram, Georgia, where the mayor recently approved a Memorial Day display featuring 79 separate crosses representing local veterans who died in war.

When a local resident asked if all 79 people were Christians, city officials said “they obviously weren’t.” So they removed all the crosses.

Then everyone got mad. So they put them all back up.

And now the mayor is playing it off like the crosses aren’t Christian at all.

Hiram Mayor Teresa Philyaw said the cross display, which she approved and planned, was never intended to be religious.

“It was never about religion — it was just to honor them,” Philyaw told FoxNews.com on Tuesday. “I was devastated when it had to come down.”

“We wanted to make sure that they weren’t forgotten. We also wanted their families to know that our hearts still bleed for them,” she said. “At the time, it never, ever crossed my mind about the religious factor in it.”

“The cross is a ‘rest in peace’ symbol to me,” said Philyaw.

That’s how good Christians have it. Their symbols are everywhere and they don’t even notice. (You show me the letter A in red font and my mind immediately jumps to atheism.)

It’s very convenient that Philyaw’s “rest in peace” symbol happens to be the same one used by Christians all over the world. You would never hear people reacting the same way if an Islamic or Jewish symbol were used for memorials instead of crosses, but you also wouldn’t expect to see that anywhere because there’s simply an unfair assumption that all American soldiers are Christians.

We’ve all heard the slander that “there are no atheists in foxholes” — this is just an extension of that.

Whether anyone will raise a fuss about what they’re doing in Hiram is unclear, but make no mistake: this is government endorsement of Christianity no matter what excuses the mayor uses to convince people otherwise.

May 27, 2016
Two More Candidates for Public Office from Arizona Just Came Out As Non-Religious
Next Post

May 27, 2016 If God Really Has a Plan, We're All Screwed
Browse Our Archives
What Are Your Thoughts?leave a comment