“Urban Christian”: I Love Trans People; That’s Why I Don’t Want Them to Pee in the Right Bathroom May 26, 2016 Hemant Mehta

“Urban Christian”: I Love Trans People; That’s Why I Don’t Want Them to Pee in the Right Bathroom

Given that Christianity Today is a publication that believes committed gay and lesbian couples are “destructive to society,” it’s not surprising that someone writing for them would treat transgender people with the same disdain.

But what bothers me most about Justin Giboney‘s essay is how he claims to love his “transgender brothers and sisters”… while spending the rest of his time arguing that they’re unworthy of basic civil rights. 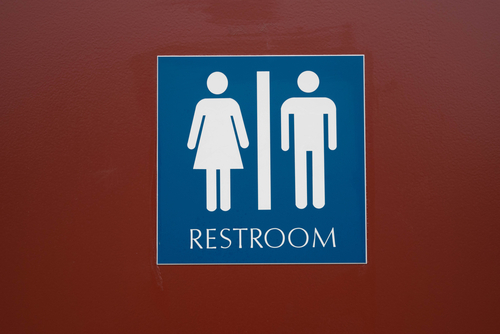 Referring to inclusive bathroom policies and the failure of “urban Christians” to speak out against the Obama administration, he writes:

… The culmination of this failure enabled a gender identity policy that is in direct conflict with the truth about biology and gender (Matt. 19:4). Moral implications aside, the policy is not sound. In haste, no one prepared school leaders for the administration of this novel, and at times ambiguous, policy. Can you imagine the government taking funding from our children’s education based on a directive that few fully understand?

Make no mistake, Christians should be the first to affirm the dignity of our transgender brothers and sisters and rail against any mistreatment. That said, the idea that one could define one’s own gender would’ve sounded absurd just three years ago. Now we’re expected to be comfortable with its conclusions. What’s more, we’re supposed to treat this continuation of the sexual revolution as the rightful heir of the civil rights movement.

We respect your dignity, trans people! But if you want to pee, we’re gonna throw a hissy fit.

Forcing people to pee in the wrong bathroom is exactly the kind of “mistreatment” Giboney should be correcting in his community.

And it’s not that few people don’t “fully understand” the issue. It’s that too many Christian leaders and politicians are quick to spread misinformation about trans people.

“This opens the door with all kinds of issues with men deciding one day they want to be women and then switching back the next day.”

“Now I wish somebody had told me when I was in high school, ” he continued, “that I could have felt like a woman when it came time to take showers in P.E. I’m pretty sure I would’ve found my feminine side and said, ‘Coach, I think I’d rather shower with the girls today.’”

Trans women are not guys pretending to be girls just to get a quick peek.

Trans people aren’t switching back and forth because they can’t decide what they are on any given day.

The trans people I know came to that conclusion after a lot of introspection — and none of it had to do with typical teenage horniness.

Maybe if Giboney actually spoke to some trans people instead of accepting the lies he’s been told in church, he’d have a better argument. Instead, he’s just as despicable as the “tainted and tone-deaf conservatives” he tries to condemn.

It’s not “flawed” policy to say transgender students should be allowed to go to the bathroom that aligns with their gender identity. Just because Giboney thinks this issue “would’ve sounded absurd just three years ago,” it doesn’t mean it didn’t exist. Trans people, just gays and lesbians before them, knew coming out would bring more problems into their lives, so they stayed in the closet for a long time. They remained invisible to the Christians who refused to accept their very existence. It’s about damn time they spoke up, and it’s about damn time we have a government willing to stand by their side.

The only people who need to change are the Christian bigots like Giboney whose ignorance about gender identity leads them to rail against policies designed to make life a little better for people who already have it rough.