Principal Charged in Cheating Scandal Said Kids’ Scores Improved Because She Prayed For Them May 26, 2016 Hemant Mehta

A couple of years ago, in Mississippi’s Clarksdale Municipal School District, teachers noticed that their students, whose standardized test scores were through the roof, weren’t performing that way in the classroom. 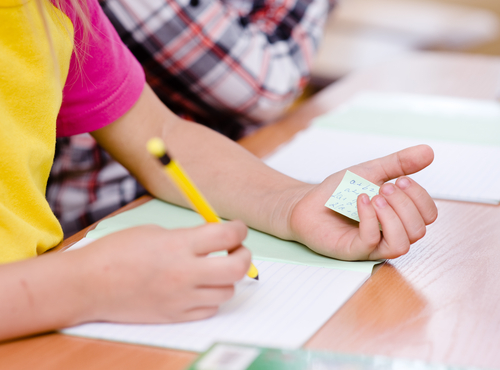 Heidelberg Principal Lowanda Tyler-Jones denies any cheating occurred on the Mississippi Curriculum Test, called the MCT2. She attributes her students’ success to the positive attitude and rigorous teaching that occurs at her school, which this year runs from pre-kindergarten to fourth grade.

That’s not what one of the students said:

One former Heidelberg student told The Clarion-Ledger her English teacher, Frances Smith, had read the answers aloud to the class during testing last year.

“She would say, ‘C for cat. D for dog. B for ball. A for apple,'” the now sixth-grade Oakhurst student said, describing how Smith provided students the correct multiple-choice response to each question.

This past December, that principal, Lowanda Tyler-Jones, was charged in connection with the cheating scandal. She lost her teaching license as did a couple of the teachers at her school.

She’s currently in the midst of her disciplinary hearing with the Mississippi Department of Education, and executive director of student assessment and accountability Walt Drane made this stunning revelation about what Tyler-Jones told him over the course of the investigation:

[Tyler-Jones] told a state education official that a dramatic increase on test scores was due to prayer.

“She indicated to me during an interview that she anointed the desks, the pencils, the doorways and also the students’ heads with holy water,” said [Drane].

There’s no reason to believe her at this point, but it’s also a silly confession. Tyler-Jones is saying she didn’t break the law by cheating; she broke the law by pushing her religion on the students.

Oh, to have seen Drane’s reaction when he heard that excuse…

Just to state the obvious, prayer will not improve your kids’ test scores. Educating them properly will.

Anointing the desks, and pencils, and doorways, and students’ heads is nothing but a waste of time. If they didn’t learn what they were supposed to learn, no amount of supernatural intervention will save them.

And let’s admit: If you pray for your students before they take a test, it’s really an admission that you didn’t do a good enough job preparing them for it.

(Image via Shutterstock. Thanks to J and Brian for the link)

May 26, 2016
Christian Extremist: Women Who Have Abortions Should Be Shot By a Firing Squad
Next Post