Johnny Depp and Amber Heard Will No Longer Be Speaking at the Reason Rally May 26, 2016 Hemant Mehta

Johnny Depp and Amber Heard, the Hollywood stars who were among the headliners at the upcoming Reason Rally, are no longer speaking at the event. 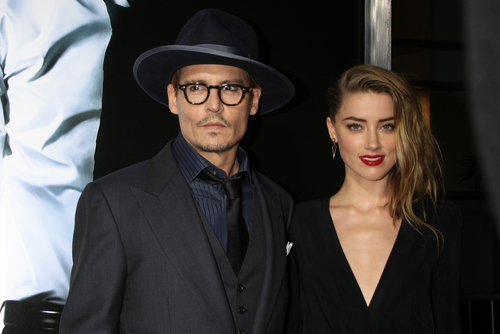 This won’t come as much of a surprise to anyone who follows celebrity gossip, as the couple has gone through an undoubtedly difficult month, culminating in the announcement earlier this week that Heard filed for divorce. That happened just days after the death of Depp’s mother.

Both were also recently in the news for a widely mocked apology video they made for illegally bringing their dogs to Australia last year without properly declaring them.

When Depp appeared on Jimmy Kimmel Live earlier this week, Kimmel was brutal (but fair) in his questioning. The whole exchange was incredibly awkward to watch:

On top of that, Depp’s band Hollywood Vampires was scheduled to perform in Europe on the days before and after the Rally… Coming to Washington, D.C. on June 4 would have been one hell of a detour, and odds are a bunch of random atheists aren’t at the top of the priority list for one of the highest paid actors in the world.

It would have been quite a draw, though. Depp alluded to his non-religiosity in a 2011 interview with Larry King. When asked whether or not he had faith, Depp shrugged off the question:

Heard never used the “atheist” word herself, but said in a 2008 interview that she wasn’t religious in any meaningful way:

… I’m not a practicing atheist. I’m a practicing human and I know how that sounds but I’m learning everything I can about being human. I was raised in a strict Catholic environment but the only thing I feel comfortable saying that I know is that I can’t know. I will never prescribe to an organization that claims to tell me how to do anything. I’m not anti “higher power” so you could call me agnostic. Whatever, call me anything but I will never be a “religious” person.

Lyz Liddell, the Rally’s executive director, told me tonight that she’s “disappointed that they’re not coming,” but that other speakers will take their place in the lineup. She also hopes to work with Depp and Heard — alone or as a couple — in the future.

She added that she had heard speculation that the two might back out due to the social pressure of appearing at an “atheist” rally, but she doesn’t believe that rumor at all. The bad timing on top of the personal complications are the more likely culprits here.

The Reason Rally Coalition will announce their absence soon.

May 26, 2016
Neil deGrasse Tyson Doesn't Always Have to Be the Smartest Guy in the Room...
Next Post

May 27, 2016 This Is How Stars Explode
Browse Our Archives
What Are Your Thoughts?leave a comment