Well, this is a new one, even by Christian bigot standards.

Dave Anderson (below), the owner of the Stillman Inn, a wedding venue in Galena, Illinois, told a couple they couldn’t get married there because they were of mixed faiths and wanted a non-religious wedding ceremony. He did this long after they’d paid a deposit, which he cashed, and the wedding was mere months away. 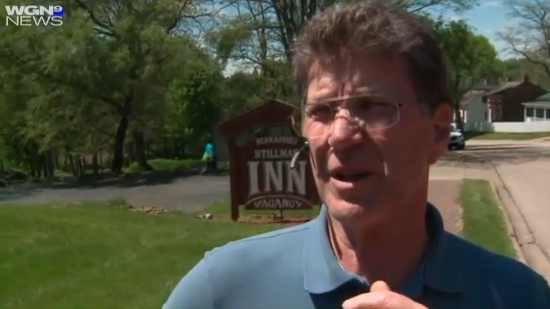 Alexandra Katzman and Jonathan Webber say they were refused a wedding ceremony at a Galena Bed & Breakfast because of their mixed-faiths. Alexandra is Jewish and Jonathan is Christian but they wanted a non-denominational ceremony.

The couple had already mailed a deposit to the Stillman Inn in Galena when they had a face-to-face meeting with the owner. Katzman says, “He just kept saying that he wouldn’t allow it. That he would only allow services that mentioned God or religion.”

Even though it’s a private business, hotels and bed & breakfasts are considered public accommodations, subject to all anti-discrimination laws.

The ACLU of Illinois has already filed a charge with the Illinois Department of Human Rights.

“The entire experience was maddening and humiliating,” said Ms. Katzman, who was married to Mr. Webber earlier this month at another location. “After months of thinking that we’d found the perfect location for our wedding, we learned that the only way we could move forward was to have a service that might well offend my Jewish guests and my religious heritage.”

“I was stunned when this happened,” added Mr. Webber. “The Inn had cashed our deposit check and had the form with our wedding needs — including a non-religious ceremony — for months. It was shocking to be turned away.”

I’ve heard of Christian business owners turning people away because they were gay, but because they were Jewish and just didn’t want religion to play a role in their ceremony? At what point will these people realize the world isn’t going to conform to their beliefs, and if they want to build a business, they have to play by the rules?

May 26, 2016
After Muslim Controversy, Swiss Canton Will Fine Parents Whose Kids Don't Shake Hands With Teachers
Next Post