Religious Dad Took His 14-Year-Old To Her Rapist and Made Them Get Married May 26, 2016 Terry Firma

… who had raped and impregnated her…

… will spend at least 120 days in jail. Keith Strawn [below, left] was sentenced on one felony injury to a child charge Tuesday afternoon. … “While you spend those 120 day in jail, perhaps you will think about the 120 days your daughter was in a vile farce of a marriage to a rapist,” [District Judge Greg] Moeller said to Strawn during the sentencing. 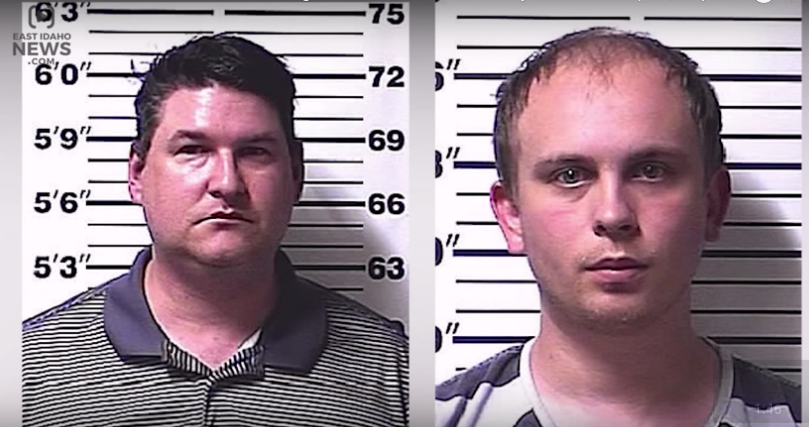 In August 2015, Strawn took his 14-year-old daughter and then 24-year-old Aaron Seaton to Missouri to consent in their marriage.

Seaton [right], now 25, pleaded guilty to a rape charge in April and is believed to have impregnated her. The victim miscarried. Seaton is serving a 15-year prison sentence.

Court records show Strawn “harbored and protected” Seaton by allowing him to live with his teenage daughter. “If you get them pregnant then you marry them,” Strawn told Moeller during the hearing.

… told the court that his client’s decision to allow the marriage “might have been a religious motivation.”

Because that makes it, you know, better.

You can almost — almost — sympathize with Strawn’s logic. Why should he be blamed for merely following the Good Book and staying true to his deeply-held religious beliefs? Assuming he’s Christian, isn’t the Bible clear about rapists’ obligations? Why, yes. Yes it is.

Deuteronomy 22:28-29: “If a man meets a virgin who is not betrothed, and seizes her and lies with her, and they are found, then the man who lay with her shall give to the father of the young woman fifty shekels of silver, and she shall be his wife, because he has violated her. He may not divorce her all his days.”

And let’s not forget

But Strawn did not “utterly refuse,” and he had the Lord on his side the whole time.

Still, he was magnanimous enough to finally allow at trial that he’d erred.

Strawn admitted to Moeller that his actions were wrong. “I love my daughter very much and I would never do anything to intentionally harm her or put her in harm’s way,” Strawn said. “I made the wrong decision.”

The God of the Old Testament begs to differ.

***Update*** (2:44p): Because the news stories about Strawn don’t point directly to a Christian faith, though we feel it’s safe to make that assumption, we’ve edited this post to reflect that he was merely “religious.” If we have anything concrete, we’ll update it again. — Hemant

May 26, 2016
In Settlement, Texas Atheist Agrees His Anti-Cross Lawsuit Was "Vexatious and Without Merit"
Next Post