In Archdale, North Carolina, the city provides jerseys for 74 local sports teams. They pay for it by working out arrangements with local businesses, who cover the costs and are allowed to put their logos or a substitute message on the uniforms. Everybody wins.

The problem is that, lately, a lot of the businesses are putting Bible verses or religious phrases on the uniforms. City officials are well aware this is a lawsuit waiting to happen, so they recently ended the sponsorship program for good. 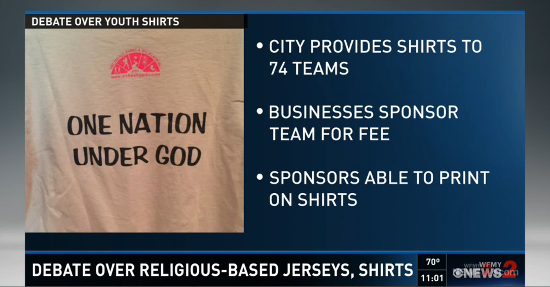 As you might guess, not everyone’s happy with that move:

“It’s never been a problem before,” added Shawn Green, youth volleyball coach in Archdale. “They say they’re worried about offending someone, well they’ve offended me now by telling me I can’t put this on there. I think they violated our free speech.“

… says a guy who doesn’t understand how “free speech” works.

Of course Green assumes this wasn’t a problem before. That’s because they were advertising Christianity, not atheism or Hinduism or Satanism.

The government isn’t telling him he can’t pray or worship as he pleases. They’re simply telling him they won’t be complicit in promoting his religion.

“The City Manager’s mistaken understanding of these legal principals should be corrected and all teams, including those sponsored by religious organizations should be permitted to include logos and statements of their choice,” said Richard Callahan, Pastor at Mt. Calvary Baptist Church in Archdale.

The city manager seems to be one of the only people who understands the law.

Callahan’s ignorant statement is the sort of thing someone would say only when he knows damn well that his religion is the predominant one in the area. If Islam were promoted on the uniforms at the same rate as Christianity, these pastors would be saying something very different.

The National Center for Life and Liberty is also urging the city to keep the religious references. A rep said they’re willing to pursue legal action, if the city doesn’t agree.

What exactly would they sue over? This isn’t some right they have; this is a privilege they’re abusing. The city didn’t say “Christian messages are banned.” They said they would no longer participate in the sponsorship program.

The only issue is how the city will make up the $7,500. There are ways to do it — fundraising, donors, etc. — but it won’t be as easy as the sponsorship program. But a lawsuit may cost the city far more than $7,500, so it’s still the right move.

Good for the government officials for stopping this problem before any legal action could occur. Religious people in the area may threaten a lawsuit, but they have no leg to stand on.

May 26, 2016
A Former Preacher Who Killed His Wife and His Lover's Husband Feels Beset By Demons and God
Next Post

May 26, 2016 Neil deGrasse Tyson Doesn't Always Have to Be the Smartest Guy in the Room...
Browse Our Archives
What Are Your Thoughts?leave a comment