A Former Preacher Who Killed His Wife and His Lover’s Husband Feels Beset By Demons and God May 26, 2016 Terry Firma

A dentist and former lay preacher in Northern Ireland who killed his wife and his lover’s husband, and made it look like a double suicide, has been back in the news following the recent TV series The Secret that is based on the case.

Colin Howell killed his wife Lesley (née Clarke) and the husband of his lover, Trevor Buchanan…, in what appeared to be a suicide pact between two lovers. The bodies were found in a fume-filled car in Castlerock on May 19, 1991.

Howell, a native of Portadown and a dentist by occupation, was a deeply religious father of ten and a former lay preacher.

His criminal career wasn’t over yet. Between 1998 and 2008, Howell sedated at least five women in the dentist’s chair of his surgery, sexually abusing them after they slipped into unconsciousness. 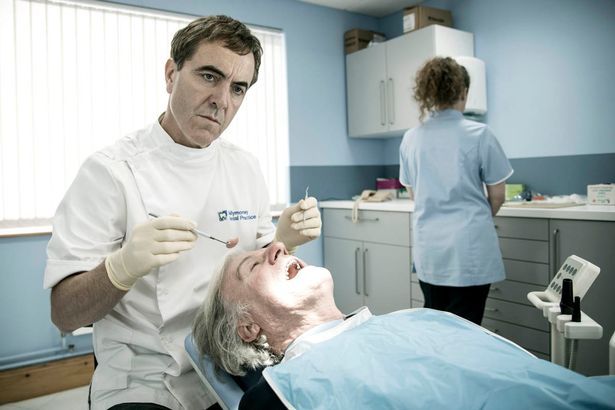 For 18 years, Howell carried the secret of the murders with him, until, urged by elders in his church who learned what he’d done, he turned himself in to the authorities in 2009. At trial, he received life in prison for the double killing (he’ll only have to serve a minimum of 21 years though). In separate proceedings, the court added five and a half years for the sexual assaults.

Now, a local newspaper, the Coleraine Times, has revealed for the first time the findings of psychiatrist Dr. Helen Harbinson, who evaluated Howell over the course of six interviews in 2009. He lives in a world of perpetual terror, she said — although it remains unclear whether that started before the murders, or after, when his conscience began to trouble him.

If Howell wasn’t faking his state of mind to get a lighter sentence, I have to feel sorry for him, no matter what he’s done. This kind of psychosis sounds like hell on Earth.

Dr. Harbinson wrote: “He describes vivid dreams of ‘destruction, hell and demons’. He is ‘tormented’ during the day.” … God’s attitude towards him (Howell feels) is one of destruction and that will not change. He believes God is in control and ‘He has chosen to destroy me.’ He thinks that this will take the form of some sort of ‘ritualistic event’. He believes that he will be attacked by people using knives or swords, or he will be burned. This will be done by warriors from a sect or group.”

Howell rejected any suggestion that he would kill himself in prison: “He said it was not in God’s plan for him and even if he tried it wouldn’t work. He believes that torment is God’s plan for him. He told me there is ‘a whole System’ geared against him. He said it is hard to describe this System, it is unreal and yet most of the time it is happening. He said ‘It’s as if I’m the focal point of everyone’s future, my destruction is part of that future.’ By everyone, he meant everyone in the world.”

“He said everyone thinks that his destruction will save the world but he knows it won’t. He is intimidated and controlled by others and that too is part of God’s plan. … He wonders if Satan controls his mind, or if he can control it himself.” …

In her assessment, Dr Harbinson concluded: “Mr Howell has a psychotic illness. He has depressive, religious, grandiose and persecutory delusions. He believes that he is being controlled by a ‘System’ and that he will be killed in a ritualistic fashion. This, he states, is because he was called to save others in the way that Moses and Noah did, but he has not fulfilled his calling.”

I wonder if the devout mentally ill have a propensity to develop horrible scenarios involving demons and God, whereas the not-so-religious and non-believers are more likely to have “secular” fears — telepathic government agents monitoring their thoughts, men in black out to get them, et cetera. The former seems more terrifying to me, which might be another reason to stay away from hardcore religion.

On that topic, my layman’s hypothesis is that religion and mental illness have no direct correlation, but often act as each other’s accelerants. If a mental disorder sneaks up on someone, a predilection for inflexible religious dogma is unlikely to help — and is possibly prone to exacerbate the situation.

I further suspect that a belief in a spirit world, in divine or demonic entities that cannot be seen, can more easily tip someone into a serious mental malady than a worldview that is free of superstitions.

Also, especially in countries where ebullient expressions of religiosity are socially acceptable, those with deep religious delusions are less likely to receive offers of psychiatric help, I think. Indiscriminate ranting about God or Satan is a warning sign in places like Sweden, the Netherlands, England, and China. By contrast, in much of South America, Africa, and the United States, where charismatic religions are common, people may shrug off such expressions as mere indications of piety — even if a serious mental affliction is at work.

If studies have been done on this subject, I’d love to see them (and maybe you would, too). Who can fill us in?

May 26, 2016
Christian Wedding Venue Owner in IL Turned Away Couple That Wanted a Non-Religious Ceremony
Next Post