Woman Who Called Obama a Gay Prostitute Loses Primary Race for Texas Board of Education May 25, 2016 Hemant Mehta

Last night, Mary Lou Bruner, the right-wing loon who once said President Obama worked as a gay prostitute to pay for his drugs, lost her primary in the race for the Texas State Board of Education. 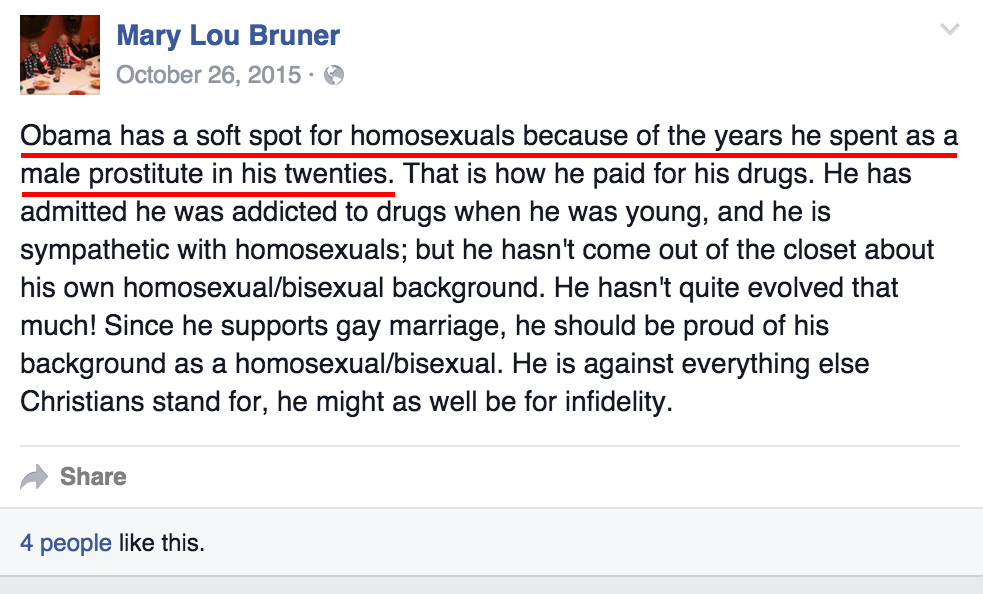 Bruner also believes slavery wasn’t a big deal in the Civil War, evolution is an atheist conspiracy, and pre-K education teaches kids about the “homosexual agenda.”

Normally, I’d think that’s all a way to suck up to the Texas electorate… but it only won her 40% of the votes!

That’s 40% too many, of course, but still. Congratulations, Texas Republicans! You finally did something right.

Now the rest of us only have to worry about all the other candidates you supported.

Remember: It was only a few years ago when the head of the Texas Board of Education was Don McLeroy, a Creationist who did everything he could to weaken the teaching of evolution in science class.

Texas Freedom Network President Kathy Miller, whose group was responsible for informing the nation about Bruner’s past statements, was relieved by the results:

“Texas escaped an education train wreck tonight. If Bruner had ultimately won election to the board, she would have instantly become the most embarrassingly uninformed and divisive member on a board that already too often puts politics ahead of making sure our kids get a sound education. We commend the majority of East Texas voters for their wisdom in this particular race.”

It’s worth paying attention to this race, not just because Bruner’s comments were so over the top, but because the Texas school board’s decisions have a ripple effect in the rest of the country. Because Texas is so large and buys so many textbooks, the board’s curriculum decisions can affect what children learn even beyond the borders.

May 25, 2016
A Summary of How the Universe Works (Sort Of) in Four Minutes
Next Post

May 25, 2016 "I'm An Atheist & I Vote" Signs Are Now on Buses and Bike Kiosks All Over Washington, D.C.
Browse Our Archives
What Are Your Thoughts?leave a comment