Ohio School Ends Tradition of Singing “The Lord’s Prayer” at Graduation, But Students Do It Anyway May 25, 2016 Hemant Mehta

Ohio School Ends Tradition of Singing “The Lord’s Prayer” at Graduation, But Students Do It Anyway

Last week, I posted about how administrators at East Liverpool High School in Ohio put a stop to the traditional singing of the Lord’s Prayer during the graduation ceremony because even they understood this was an unconstitutional promotion of Christianity. (The letter from the Freedom From Religion Foundation probably helped, too.)

No one was calling for the end of religious music at the school — there are obviously ways to do it legally in a choir or orchestra class — but as you can imagine, Christians were quick to see this as persecution. Because if they’re not allowed to push their religion on everyone else, even in a public school, they assume they’re being oppressed.

All of that happened before the ceremony itself. So what happened during the actual graduation? 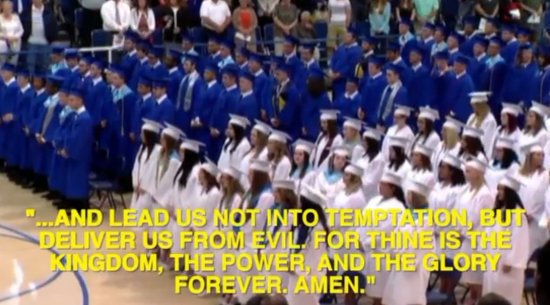 Valedictorian Jonathan Montgomery took the stage and led the entire class of graduates in reciting the Lord’s Prayer.

The students showed they’re not letting the tradition go, and enthusiastic applause and a standing ovation followed.

He found a loophole and led his classmates in prayer, technically without the knowledge or approval of the administration. FFRF won’t be filing a lawsuit over that.

Congratulations, students. You showed the non-Christians in the audience that you don’t give a damn about them. You proved what we already knew: you’re in the majority and that means you’ll impose your will on us whenever you have the opportunity. You reminded everyone of the tunnel-vision so many Christians have on these issues, unable to cope with the fact that not everyone believes as they do.

Congratulations on perpetuating all the stereotypes I already had about you.

This wasn’t courage on display. This was arrogance.

Courage would have been the valedictorian saying, “Even though I’m a Christian, I recognize that our class is diverse and even students who disagree with me should be able to enjoy this ceremony without me foisting my religious views on them.”

It wasn’t enough that you could pray before the ceremony, or after the ceremony, or at church, or at home, or anywhere else at all other than during the graduation itself. Instead, you left your non-Christian classmates with one last reminder that your beliefs trump theirs and that even a graduation ceremony has to conform with your faith at all costs.

Jesus may be proud of you, but I think you’re jerks.

(Screenshot via WTOV9. Portions of this article were published earlier, because this exact same thing has happened before.)

May 25, 2016
With Any Luck, There'll Be a Blog Just Like This One, But With "Nutty Stories" About Atheists
Next Post

May 25, 2016 Catholic School Issues Dance Rules: No Cleavage, Heels Stay On, and Only "Serious" Dates Allowed
Browse Our Archives
What Are Your Thoughts?leave a comment