In Scottsdale, Arizona, members of The Satanic Temple were slated to give the opening invocation for the city council on April 5. When a logistical issue forced the Satanists to request an alternate date, they chose July 6.

But now that may not be happening either. I guess city officials finally realized that Satanists were taking advantage of the open platform. 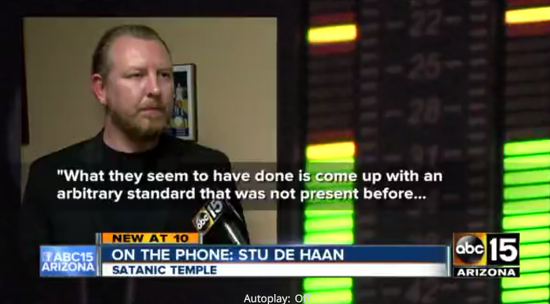 City spokesman Kelly Corsette says Scottsdale informed the Satanic Temple’s Arizona chapter that only representatives from institutions that have a substantial connection to the Scottsdale community will be allowed to give the invocation.

Scottsdale now is making other arrangements for the July 6 invocation.

That’s not necessarily an unreasonable rule, as the Temple’s chapter is based in Tucson and not Scottsdale, but why did it only become an issue after the Satanists were given the green light? And doesn’t it count if some of the Temple’s members live in Scottsdale?

It sounds more like city officials feared what would happen and scrambled to find a reason to boot them from the list.

“What they seem to have done is come up with an arbitrary standard that was not present before…” [Satanic Temple spokesman Stu] de Haan said. “[A]s the months go by, they decided to come up with something to discriminate against us.”

Lucien Greaves, the Temple’s national spokesperson, told me via email that they’re considering legal action if the city doesn’t fix this mistake. He added:

After having approved The Satanic Temple’s request to deliver a pre-City Council meeting invocation, Scottsdale has suddenly decided to adhere to a new standard that is entirely undefined.

Naturally there are those who are now asking us what level of membership and activity we do have in Scottsdale. We are not going to answer that. That is a question for Scottsdale to answer, and we’re not going to answer it for them. We were never asked our level of membership and/or activity in Scottsdale when applying to deliver an invocation. Apparently, there is a measurable standard for a “substantial connection” that we fail to meet, and it’s up to the city to clearly define what that standard is.

We want to know exactly what Scottsdale thinks they know about TST’s presence in Scottsdale, what type of research they did, and, of course, whether or not they apply this level of scrutiny to every applicant.

Those are fair questions. Can’t wait to hear the city’s excuses.