British Doctor Joins ISIS, Would Like to Keep Some Victims Alive Just To Torture Them Longer May 25, 2016 Terry Firma

British Doctor Joins ISIS, Would Like to Keep Some Victims Alive Just To Torture Them Longer

In 2014, a British doctor of Palestinian descent who specializes in endocrinology, and who worked for the U.K.’s National Health Service, traveled to Syria to join ISIS. BBC News just published a profile of the man, Issam Abuanza.

Abuanza left his Sheffield home, his wife, and their two children to volunteer as a fighter and a medic. He is thought to be the first practicing NHS doctor to have joined the so-called Islamic State.

As you might expect, the Hippocratic Oath was among his first casualties.

In a January 2015 Facebook post, Dr. Abuanza celebrated the terrorist attack on the Parisian headquarters of the satirical magazine Charlie Hebdo in which 12 members of staff were gunned down, writing: “Praise be to God for this terrorist act. God kill off their enemies, military and civilian, men and women, adult and children.”

The following month he wrote about the killing by IS militants of a captured Jordanian pilot who was burnt alive, complaining that: “I would’ve liked for them to burn him extremely slowly and I could treat him so we could torch him once more.” 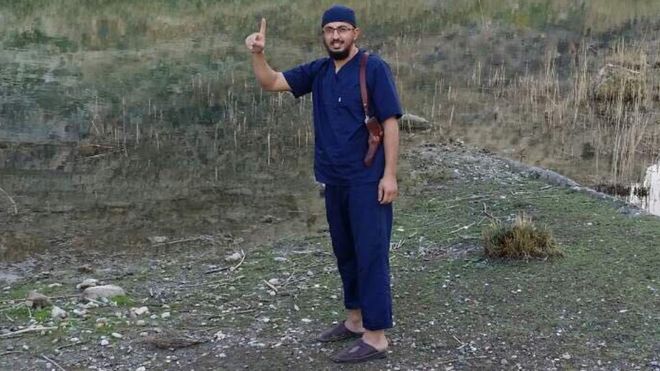 His sister, Najla Abuanza, told the BBC: “He used to be quite the dashing young man, very modern. I’ve no idea how he became like this or who showed him the path to terror.” Her parents had become unwell because of the strain, she said. “They will never forgive him. My dad’s wish was to see him before he dies. He has spent all his money on him and his education and this is what he does.”

The BBC notes that Abuanza was part of a relatively well-educated group of U.K. ISIS joiners, saying

… [he] was not the only professional among the British recruits; a third of them went to university and three say they were teachers.

May 25, 2016
Catholic School Issues Dance Rules: No Cleavage, Heels Stay On, and Only "Serious" Dates Allowed
Next Post

May 25, 2016 The Torquemada of Sex, Ken Starr, May Get Fired From Baylor Over Sex-Assaults Response
Browse Our Archives
What Are Your Thoughts?leave a comment