There Are Now More Non-Religious People in England and Wales Than All Christians Combined May 24, 2016 Hemant Mehta

In a stunning analysis of the religious demographics in England and Wales (but not Scotland and Northern Ireland), Professor Stephen Bullivant of St Mary’s Catholic University in Twickenham found that the percentage of non-religious people has nearly doubled from just a few years ago.

In 2011, 25% of people in England/Wales considered themselves non-religious. By 2014, the latest year for which he had data, Bullivant found that number had skyrocketed to 48.5%.

There are now more people in those areas without religion than there are all Christians combined. 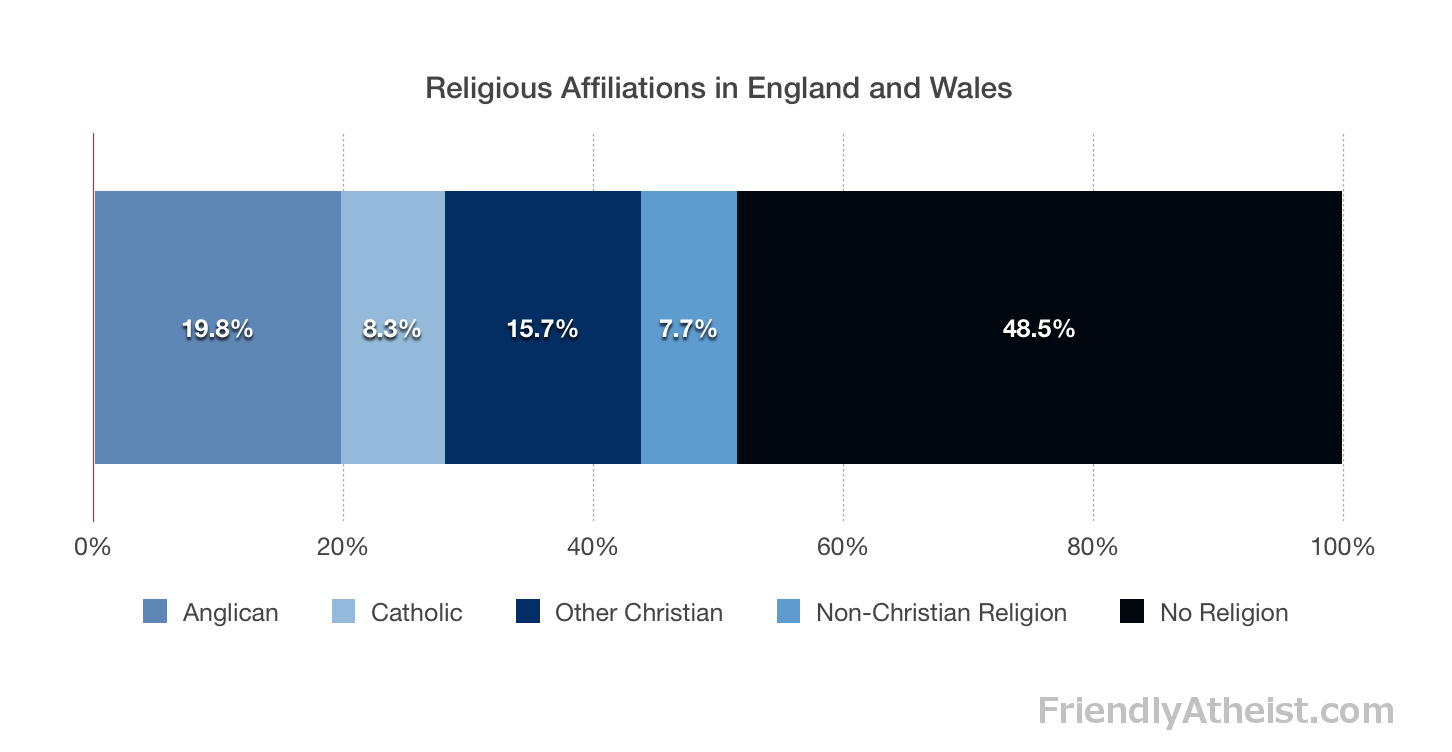 Why is this glorious revolution happening? In part, it’s because people who grew up religious are leaving their faith, while people who have no religion aren’t going anywhere.

Four out 10 adults who were raised as Anglicans define themselves as having no religion, and almost as many “cradle Catholics” have abandoned their family faith to become “nones”.

Neither church is bringing in fresh blood through conversions. Anglicans lose 12 followers for every person they recruit, and Catholics 10.

The vast majority of converts come from other Christian denominations, rather than non-Christians or people with no religion. “There’s a kind of denominational musical chairs,” said Bullivant. “No one is making serious inroads into the non-Christian population.”

It’s a wonderful change that suggests organized religion’s power is fading fast. It also makes you wonder why Parliament still has a House of Lords…

To no one’s surprise, the Church of England was quick to say the sky isn’t falling for them:

A spokesperson for the Church of England said: “The increase in those identifying as ‘no faith’ reflects a growing plurality in society rather than any increase in secularism or humanism. We do not have an increasingly secular society as much as a more agnostic one”…

There’s some truth to that. Saying you’re not religious doesn’t automatically mean you’re an atheist. As those of us in the U.S. know all too well, it could mean that you still believe in God and just don’t use a religious label. Either way, though, it also means a hell of a lot of people no longer identify themselves as members of a specific religious denomination. Their religion is merely a philosophical one. If the Catholic Church or the Church of England disappeared tomorrow, their lives would hardly be affected.

That’s the sort of religion I could live with.

May 24, 2016
"Happy Chewbacca" Lady is Using Her 15 Minutes of Fame to Tell You All About Jesus
Next Post

May 24, 2016 Some Evangelicals Think Donald Trump Is One of Theirs... Because of How He Points During Rallies
Browse Our Archives
What Are Your Thoughts?leave a comment