After last week’s look at the nasty, racist history of the Religious Right, Samantha Bee continued her look at Christian conservatives last night with a segment on abortion.

The piece included a conversation with Frank Schaeffer, my Patheos colleague and one of the people responsible for the “pro-life” movement. He called it the “single greatest regret of my life.” (Starting the anti-abortion movement, I mean. Just so we’re clear.) 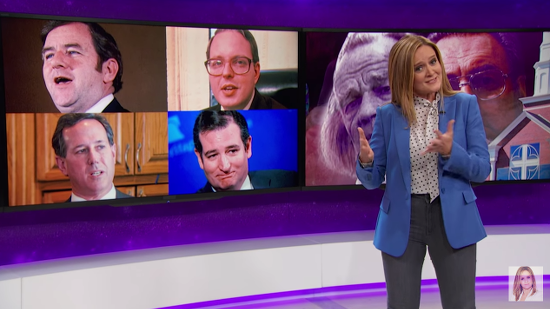 Bee correctly points out how Christians who claim to be “pro-life” have done plenty to injure or kill abortion providers, before adding:

Let’s look at everything the Bible says about abortion! Oh, look! There it is! In the Book of Doesn’t Exist.

Right next to the verse condemning lesbians.

You know, this is “Part Two” of her series on the Religious Right… but that doesn’t mean it has to end there. The writers of Full Frontal would be doing society a huge favor by making this a recurring segment. There’s no shortage of material. Trust me.

May 24, 2016
Why the "Stalin Was an Atheist" Argument Doesn't Make Any Sense
Next Post