“Happy Chewbacca” Lady is Using Her 15 Minutes of Fame to Tell You All About Jesus May 24, 2016 Hemant Mehta

By now, you’ve surely seen the video of Candace Payne trying on an electronic Chewbacca mask. The more she laughs, the more we hear the Wookiee noises, and the cycle continues until even the viewers are laughing along with her. 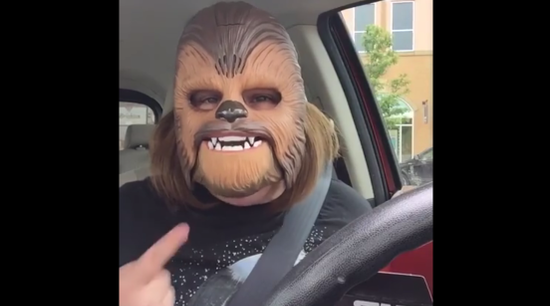 The video, which she streamed live on Facebook with her phone last week, already has about 140 million views as of this writing. It led to a writeup in the New York Times and appearances on several news programs over the past few days.

Given the fleeting nature of viral fame, is there anything else can she do with her 15 minutes?

Yes there is. While the spotlight is still on her, Payne wants to make sure you’re obeying the Lord.

Over the weekend, during a regional church conference in Texas called the Fine Arts Festival, Payne appeared on stage to celebrate her virality and remind the crowd to be “spiritually fit”:

… When I was 16, I had a vision and dream from the Lord about my future, being used for His glory. I didn’t understand the interpretation of it. I still, to this day, at 37 years old, try to figure that dream out. But that dream has never left my heart, nor my mind, nor the way that I walk and follow Jesus…

It doesn’t matter how talented, how anointed, how gifted, how passionate, or how willing you are, if you’re not fit to do the things that God has called you to do. And that is spiritually fit. The thing that will take you further and further in the Kingdom of God is three things: Diligence — be diligent in the work of the Lord. Patience — have those moments where you stop and you wait upon the Lord. Don’t rush into ministry or a good opportunity because it looks shiny. Wait for the voice of God to direct you. And then the third thing, it’s the biggest thing, if I could get to my 16-year-old self, is have obedience. When He tells you move, move. When He tells you stop, stop…

Do not try to make a name for yourself. His name will always outshadow yours.

I’m not sure if channelling Chewbacca is how God is using her for “His glory,” but I suppose it’s more interesting than sending a message via toast.

Is anyone surprised that she’s a Christian? I’m not. After all, if you have an obsession with a fictional story that people argue about long after they should have grown out of it, it’s only natural that you’ll appreciate Star Wars, too.

May 24, 2016
Samantha Bee Explains the Religious Right's Hypocrisy on Abortion
Next Post