As the year comes to an end at Marian High School in Mishawaka, Indiana, the Catholic school was tagged with graffiti that could be an awful senior prank or a hate crime.

On the football field’s press box, someone wrote the phrase “Class of 2016” along with an upside-down cross. Elsewhere on school property, someone wrote “Jesus Is Dead” next to a swastika. 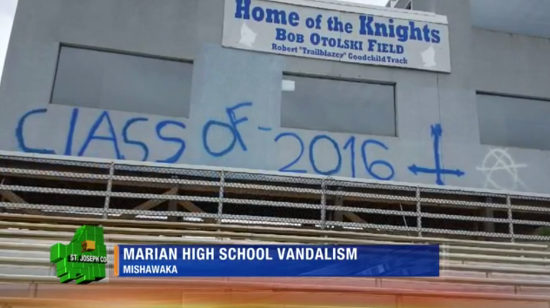 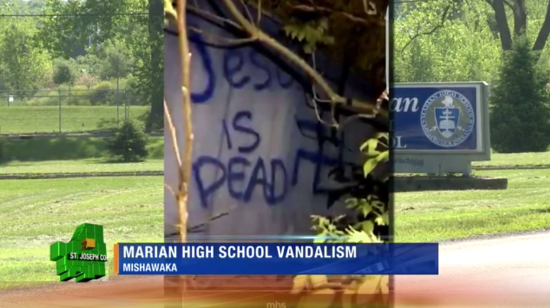 While the graffiti has been cleaned up, it doesn’t appear that police or school officials are any close to catching the culprits. Which is especially disturbing to me, since some of the graffiti makes it look like an atheist did this.

Let me say without hesitation that this is despicable behavior, no matter who did it. I hope the people who did this are caught, and I sincerely hope this is nothing more than a prank pulled by a couple of idiots. No school, religious or otherwise, should have to put up with this.

May 24, 2016
Arkansas Mayor: Pray for Unknown Victims of Local Tragedy; "God Will Know Who You Are Talking About"
Next Post

May 24, 2016 Tired of Potholes? Jesus Will Fix Them After a Little Sprinkle of Holy Water
Browse Our Archives
What Are Your Thoughts?leave a comment