A Longtime Christian Theocrat Was Defeated in His Kentucky Primary; The Nightmare is Over May 24, 2016 Hemant Mehta

A Longtime Christian Theocrat Was Defeated in His Kentucky Primary; The Nightmare is Over

Back in 2002, Kentucky legislators passed a law saying that “safety and security of the Commonwealth cannot be achieved apart from reliance upon Almighty God.” In 2006, State Rep. Tom Riner, a long-time Democrat, stuck even more religious language in a new Homeland Security bill: 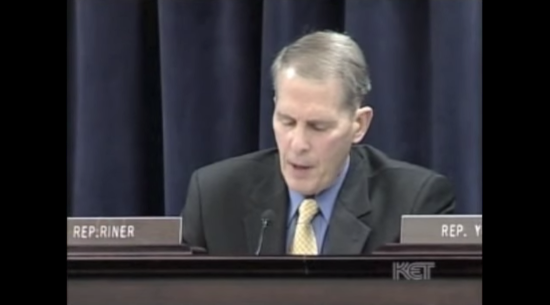 The 2006 law organizing the state Office of Homeland Security lists its initial duty as “stressing the dependence on Almighty God as being vital to the security of the Commonwealth.”

Specifically, Homeland Security is ordered to publicize God’s benevolent protection in its reports, and it must post a plaque at the entrance to the state Emergency Operations Center with an 88-word statement that begins, “The safety and security of the Commonwealth cannot be achieved apart from reliance upon Almighty God.”

It wasn’t just talk, either. If officials didn’t comply with the new law, they risked spending 12 months in prison.

(American Atheists filed a lawsuit over this, but the Supreme Court ultimately chose not to hear the case.)

Americans United for Separation and Church and State’s Rob Boston adds that this was nothing new for Riner:

Riner’s proselytizing has long roots. Friends recalled an incident in the 1970s when the musical “Hair” played in Louisville. Bothered by nudity in the show, Riner leaped on stage and disrupted the performance by waving a Bible. And the policies he promoted ran in his family. In the 1970s, his wife, Claudia, also served in the state legislature. Just like Riner, she sponsored a Ten Commandments bill. Hers required public schools to post the Decalogue, and the U.S. Supreme Court struck it down in 1980’s Stone v. Graham ruling.

I bring all of this up because of some good news.

After decades in the state legislature, Riner was defeated last week in his primary by a women who will become the “first African American woman to serve in Kentucky’s State Legislature in 20 years.” (Because Attica Scott has no Republican challenger in the race, she will automatically win the seat.)

Finally: A Democrat who actually votes and thinks like a Democrat.

“During the campaign it was really about highlighting that we needed a new voice and a fresh face in Frankfort,” Scott said. “We had this 34-year incumbent who was anti-LGBT and anti-women’s rights. He was a Democrat in name only and refused to caucus with the Democrats since the 1990s, so it was really about highlighting and exposing his record and lifting up my social justice agenda.”

Congratulations to her and three cheers for the voters who finally kicked out a politician who thought he was elected to be a preacher instead of a representative for all of his constituents.

May 24, 2016
Christian Preacher Yells Inside Store As Part of Her "Target Pervert Revolution"
Next Post

May 24, 2016 Arkansas Mayor: Pray for Unknown Victims of Local Tragedy; "God Will Know Who You Are Talking About"
Browse Our Archives
What Are Your Thoughts?leave a comment