This is a guest post by Lyz Liddell. She is the Executive Director of the Reason Rally.

Just over six months ago, I made one of the biggest decisions of my life: I quit my job with the Secular Student Alliance. I was their second in command after the Executive Director, August Brunsman; I had been involved with the organization as a staffer for over seven years and as a volunteer for over a decade. I didn’t leave because of some huge conflict. I left because of an incredible opportunity where I could really make a difference:

I became the Executive Director of the Reason Rally Coalition. 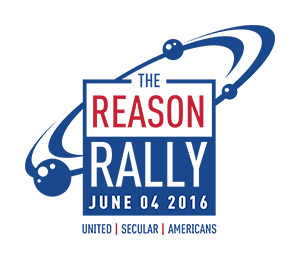 This has been hands-down the hardest job I have ever had. I’ve been working over the past six months to pull together a historic event: the largest gathering of atheists ever. We’re expecting 30,000 folks at the Lincoln Memorial on June 4 — bigger than Reason Rally 2012 — and with a speaker lineup that we couldn’t have dared to hope for just four years ago.

Reason Rally 2016 is shaping up to be a watershed event. Yesterday I spoke to the Wall Street Journal about the rising influence of the secular voter bloc. We’re talking to reporters from Business Insider. We’ve gotten media inquiries from The Source (a major hip-hop outlet). Politicians are watching us. Ray Comfort and Ken Ham are watching us.

But we need your help.

Reason Rally 2016 will cost about one million dollars to execute. Since just this past November, we have raised an unbelievable sum — over $900,000 from over 2,000 supporters — toward that goal. We just have a little less than $100,000 to raise to meet our goal.

Will the Rally still happen if we don’t meet that goal? In all honesty, yes. But this last stretch is what makes the difference between a Rally that happens and a Rally attendees will never forget. Your gift will enable closed captioning for hard-of-hearing attendees. It will provide a live-stream broadcast so local groups can host watch parties and people who can’t make the trip can still hear our powerful message. It will mean bottled water and sunscreen for our army of volunteers. It’s all this and a hundred other little bits and pieces — none of them fundamentally critical, but each adding tremendous value to the Rally.

That’s what I would like to ask for your help with — help us close the gap. If every person reading this blog gave $10 right now, we would meet our goal this week. This is your chance to be a part of history, a force to be reckoned with. Stand alongside thousands of others by giving $10 to the Reason Rally today.

We have an incredible team of board members, speakers, volunteers, and supporters making this event possible, against all odds, and we want you to be a part of the team. I am incredibly grateful for the phenomenal people who have stepped forward to make this monumental effort happen. I am grateful for you. We’re just two weeks away from this event. Please join thousands of secular Americans and be part of history.

We’ll see you there.

May 23, 2016
Chinese Authorities Have Been "Decapitating Churches," Says the New York Times
Next Post