Texas School Board Candidate Asked in Debate If He’s “Christian Enough To Represent This District” May 23, 2016 Hemant Mehta

In the race for a seat on the Texas State Board of Education, there are two Republican candidates vying for the Party’s nomination in District 9. Their runoff election takes place on Tuesday, so naturally, they held a debate over the weekend. But instead of sticking strictly to their policy differences, their religious views were front and center.

One of the candidates, we’ve written about before. Mary Lou Bruner is the right-wing loon who thinks President Obama used to be a gay prostitute, evolution “is a religious philosophy with propaganda supporting the religion of Atheism,” humans and dinosaurs once lived together in perfect harmony, and pre-K education teaches kids about the “homosexual agenda.”

So it was that candidate against opponent Keven Ellis. And look at where their debate went: 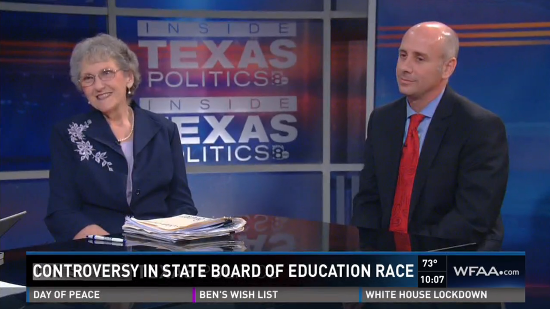 “Ms. Bruner has said that she wants creationism taught in science class,” Inside Texas Politics host Bud Kennedy noted. “And that her views represent those of the district. Are you Christian enough to represent this district?”

“Yes, I am,” Ellis insisted. “I’ve taught Sunday school and Bible quiz in my church in 20 years. And I believe it’s my responsibility to teach my faith to my children. The catch of when you get religion in school is whose religion is going to be taught?”

Bruner disagreed: “When we only teach theory — it’s a theory, theories are unproven — but in the science class, if only one theory is taught then we’re teaching a religion. It is the religion of atheism.”

I’m going to sidestep Bruner’s ridiculous answer for a moment, because that conversation, even without her, has no business in American politics.

It’s absolutely irrelevant how “Christian” your district is if you’re representing them on the school board (or any other government seat for that matter). Public schools aren’t there to advance Christianity. Kennedy asked a horrible question, but Ellis’ response was even worse.

A better candidate would have said, “It doesn’t matter how Christian I am because my faith isn’t the reason you should vote for me. You should give me your support because I have better ideas than my opponent for how our schools ought to be run.”

Instead, Ellis gave an answer that threw every non-Christian under the bus. As if a Muslim or atheist or Jew couldn’t adequately represent the same District.

Obviously, Bruner’s answers were batshit crazy — suggesting that scientific “theories” are no better than guesses and amount to state-sponsored promotion of atheism. But instead of calling her out on her bullshit, the reporters were cowards, pretending to be “objective” when even a fair reporter could have easily told her she was full of it.

So those are your Republican options in District 9, Texas. I don’t even know who the Democrat is, but if that person can walk and chew gum at the same time, this should be a runaway victory.

Then again, this is Texas. Which means Bruner’s faith-based ignorance should carry her far.

(via Raw Story. Thanks to Greg for the link)