Michigan Spree Killer Says He Didn’t (Really) Do It; It Was the Devil in His Uber Phone App May 23, 2016 Terry Firma

Michigan Spree Killer Says He Didn’t (Really) Do It; It Was the Devil in His Uber Phone App

A Michigan Uber driver who, in February, shot and killed six people and wounded two others, including a child, says he was being controlled by a demonic force.

Jason Dalton told police he had killed but was not a killer; that it was his Uber app that had taken control of him and led him to open fire on random targets. 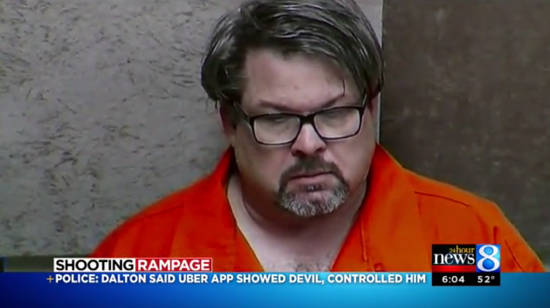 He had only recently started driving for Uber and spent that night picking up and dropping off fares in between the shootings at three locations in the Kalamazoo area. …

Dalton told police that the Eastern Star symbol — an inverted, colored five-point star — then the devil popped up on his phone through the Uber app.

“Dalton acknowledged that he recognized the Uber symbol as being that of the Eastern Star and a devil head popped up on his screen and when he pressed the button on the app, that is when all the problems started,” police wrote.

He described the devil figure as a “horned cow head or something like that and then it would give you an assignment and it would literally take over your whole body.”

Dalton, who wanted to be a police officer but became an insurance adjuster instead, didn’t start a shootout with arresting cops because, he said,

… the color of the Uber app went from black to red.

Dalton had no known mental health problems before the shooting.

Late last week, Dalton was dragged out of court after an outburst at a preliminary hearing in which he was heard to exclaim,

It’s time to get to temple!

The judge nonetheless ruled that Dalton is fit to stand trial on all 16 charges: six counts of open murder, two counts of attempted murder, and eight counts of “felony firearm.”

Meanwhile, the commenters at Charisma News know just what to do, and it involves more blood — the blood of Jesus.

There is absolutely nothing but the blood of Jesus that will stop it all. … People, the power of Christ will handle it all.

If they could shower in it, they would — and they think you and I should, too.

He needs an exorcism. I absolutely believe what he said. Demons are on the loose because they know their time is short. If you are not saved and have the blood of Jesus covering you, this can happen to you too. And it’s happening more and more in the United States and all around the world. … Jesus loves you! No matter what you’ve ever done!

Of course, that could be a failing more than a virtue.

May 23, 2016
Two Tennessee Pastors Among Those Arrested For Trying to Hire an Underage Prostitute
Next Post