In India, Security Cameras Capture a Cow Attacking Men in the Middle of an “Honor Killing” May 23, 2016 Tracey

In India, Security Cameras Capture a Cow Attacking Men in the Middle of an “Honor Killing”

A security camera in India captured the stabbing — excuse me, honor killing — of a woman by her father and uncle… as well as the cow who decided to interrupt their disturbing actions. 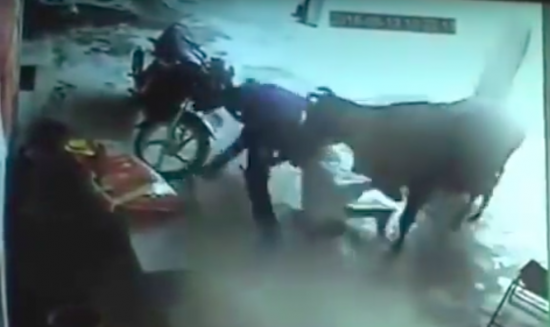 The young woman, allegedly a minor, upset her family when she eloped with a 22-year-old man back in January. After her husband was sent to jail at the request of her father, she refused to return home and was sent to a women’s shelter in the state of Madhya Pradesh, where she was later attacked.

The man brutalized by the cow apparently suffered injuries. However painful that might have been, though, it wasn’t as awful as what his victim went through. She didn’t survive the stabbing.

It’s questionable what drove the cow to attack the men. It could have been that her calf was nearing the commotion and she got defensive… or perhaps animals possess an emotional intelligence that we don’t give them enough credit for.

The two men are currently on the loose.

May 23, 2016
Screaming Christian in Target Store is Confronted by Customer, Then Escorted Out By Security
Next Post