Congratulations on still being alive! May 21 marked the 5th anniversary of when everyone but the “True Believers” was supposed to have died in a fiery “rolling earthquake” that marked the rapture and end of the world. 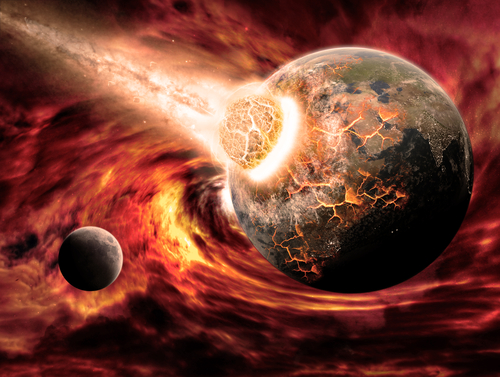 That didn’t happen, as we all know, so Family Radio host and Bible teacher Harold Camping put on his best face and told the world that May 21 had, in fact, been Judgment Day… but, well, turned out it was just a spiritual judgment. (Nice save!) Camping had already predicted that, following the rapture and the earthquakes (which were necessary to pop the dead believers out of their graves, of course), the Earth and its few survivors would suffer five months of destruction, culminating on October 21, 2011. That day would now be the all-in-one for rapture and final destruction. Somehow, he got that one wrong, too.

Harold Camping’s declarations hold special interest to me because, in 2008, I had no choice but to listen to a lot of his sermons and call-in shows. Having just lost my apartment, I briefly moved in with the family of a friend from Bible camp, whose dad followed Camping’s teachings that all churches were under God’s judgment and should be abandoned. In the few years prior to that, I’d sampled the progression in Camping’s teachings as he became more and more convinced that May 21st was, without a doubt, to be the end of the world. By 2008, however, with exception of occasional bouts of CBC Radio, Family Radio played 24/7 in every room of their house so that the children would always be within reach of the saving influence of the Bible. (I’m convinced you haven’t experienced strange dreams until you’ve slept with Camping’s doomsday preaching in your ears all night long!)

I briefly read a few of Camping’s books (lots of mathematical equations juxtaposed against Biblical calendars) and hoped he and my very confident friends were wrong. Agnostic by the time 2011 rolled around, I was still a bit nervous — until it dawned on me on May 22 that all religions make wild and scary claims with deep conviction. Camping’s biggest mistake was making a prediction that could be so easily falsified!

To his credit, Camping did, in March of 2012, acknowledged his error of having made such a bold and definite prediction. (He’d also been wrong about a 1994 end-of-world guesstimate). Until his death in 2013, he refused to make any new predictions.

Some of his followers, on the other hand, haven’t been nearly as eager to put down their calculators and complex Biblical algorithms. Many had liquidated their homes and assets to buy billboards warning people all over the world of impending doom, and that kind of devotion doesn’t die quietly.

According to eBibleFellowship, an online community of Harold Camping followers, the world was (once again) supposed to “in all likelihood” end on October 7, 2015. But odds are you didn’t hear about that date because they were smart enough not to spend millions on advertising this time around. They also safely hedged their bets by using words such as “likelihood” rather than their 2011 claim that “the Bible guarantees it!”

They still, however, won’t admit they were wrong. The world has still, apparently, been judged. According to their October 8 post, the world is like a man who was given a warning of terminal disease by his doctor.

“The man passes the 6 months (or year) he was told. Yet the prognosis hasn’t changed. He’s still terminally ill. It’s still certain he will die from his disease. It’s just a matter of when that remains in question.”

That may be true, but when the doctor giving you a terminal diagnosis has a long history of being wrong, I think it’s safe to say you don’t have much to worry about. On the other hand, I give them credit for finally taking a page from the rest of Christendom — as long as Jesus is coming back “soon” and “we don’t know when,” they’ve finally landed on a prediction that isn’t falsifiable.

P.S. In case you’re curious, another person has predicted a new End of the World date: May 20, 2018. Plan your Rapture parties accordingly.

May 23, 2016
Muslim Woman, Famous For Selfie Promoting Coexistence, Doesn't Want To Coexist With Jews
Next Post