The drama is surely a bit much in this opening paragraph from a piece by New York Times reporter Ian Johnson:

Along the valleys and mountains hugging the East China Sea, a Chinese government campaign to remove crosses from church spires has left the countryside looking as if a typhoon had raged down the coast, decapitating buildings at random. 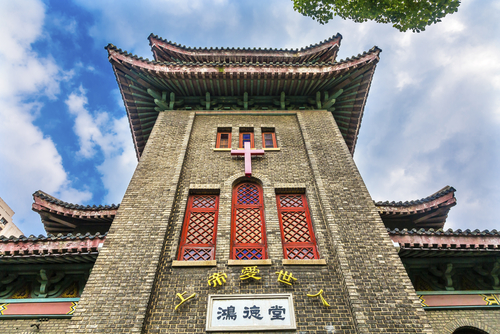 That’s a nonsensical visual, considering how relatively scarce Christian churches are across China (60 million Chinese out of 1.3 billion — so, about 4.5% — are Christians; and many millions of them worship in home-based churches that carry no soaring cross). Besides, after the devastation of an actual typhoon, I imagine the coastal areas look very different from the reality of even hundreds of churches whose spire crosses have been taken down. Also, a typhoon kills people, of course; by contrast, the removal of crosses produces no deaths.

The word “decapitate” is cut from the same cloth. It is full-on theatrics, verbal grand guignol, with its meaning of brutal, bloody, head-chopping murder. Can’t we just agree that the government forcibly removing crosses from churches is wrong and awful and condemnable, without resorting to such unhinged hyperbole?

… the authorities have torn down crosses from 1,200 to 1,700 churches, sometimes after violent clashes with worshipers trying to stop them.

While the government is unlikely to begin tearing down crosses across China, the sources say, local authorities are expected to begin scrutinizing the finances and foreign ties of churches and other spiritual institutions as part of an effort to limit the influence of religions the party considers a threat, especially Christianity. …

Several clergy members in the region said they were under pressure to demonstrate their loyalty to the Communist Party. Some churches, for example, have begun extolling [President Xi Jinping’s] campaign to promote “core socialist values” — a slogan meant to offer a secular belief system that bolsters the party’s legitimacy.

Other churches have begun displaying their building permits, implicitly endorsing the government’s authority to approve or reject church construction, including crosses. …

Unregistered churches appear vulnerable, too. In December, the police detained several members of the unregistered Living Stone church in southern China’s Guizhou Province after they refused to join a government-run Protestant church. The pastor was later arrested on charges of “divulging state secrets.”

By contrast, American Christians claiming to be persecuted have neither the faintest sense of proportion, nor a healthy relationship with reality.

May 23, 2016
Michigan Spree Killer Says He Didn't (Really) Do It; It Was the Devil in His Uber Phone App
Next Post

May 23, 2016 We Need Your Help to Make the 2016 Reason Rally Even Greater
Browse Our Archives
What Are Your Thoughts?leave a comment