Australia’s Sunday Night news segment covering Ken Ham and his Ark Encounter project aired over the weekend, but instead of shining a spotlight on the deceptive ways Ham raised money and obtained a multi-million-dollar tax credit from the state of Kentucky, the show left viewers with a 15-minute commercial for the attraction. 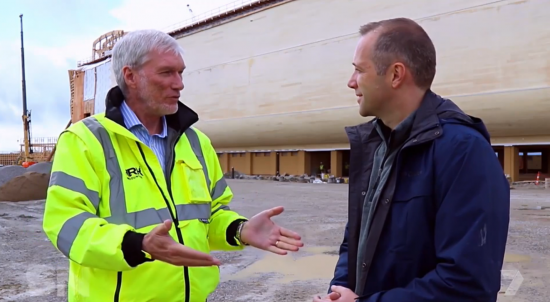 PENNELLS: The man driving this epic project is Ken Ham. They said it couldn’t be done. But he wasn’t listening. [Music swells]

What Pennells failed to specify was that the people telling him it couldn’t (or shouldn’t) be done weren’t the ones who doubted whether wood could be cut and arranged in the shape of a giant boat.

They were the people telling him it was unconstitutional to use tax incentives to do it. Without government assistance — Kentucky will give his ministry up to $18 million in tax credits based on attendance — the project never would have happened. However you spin it, Ham doesn’t deserve a pat on the back for his resistance to adversity.

Nor does Ham deserve praise for his description of how he paid for the attraction:

PENNELLS: When this is finished, how much is it going to have cost?

HAM: It’ll be around about 100 million dollars, and it’s been funded totally by private donations.

Ex-squeeze me? A-baking powder? “Funded totally by private donations” was a massive lie that went unchecked by Pennells. Of that $100 million, $62 million is from the sale of Ark bonds and must be repaid to investors, i.e. not donations. The only donations will be coming from the Kentucky taxpayers who will see a portion of their property taxes diverted to Ham’s ministry over the next 30 years instead of to the rest of their community, as stated in Answers in Genesis’ TIF agreement. Let’s not forget the “private donations” from park employees who have a mandatory 2% tax on their paychecks to refund the Ark bonds. In addition, the city practically gave Ham’s ministry 98 acres of land (they paid $1), another $200,000 in real estate incentives for the purchase of the land, and recently got the state to pay $10 million for highway improvements to accommodate Ark Encounter traffic.

How was all of this overlooked by the Sunday Night team?

I guess they didn’t fly all the way in from Australia to be bored with numbers… but they did find some of our token religious fanatics.

PENNELLS: [Ken Ham] found what he was after deep in America’s Bible Belt. Kindred spirits.

Kim Davis, the martyr-basking Kentucky county clerk who was jailed for refusing to issue marriage licenses to same-sex couples, appeared on screen.

DAVIS: He was nice. He had a real nice accent, too. Heh heh heh heh.

Davis’ presence in the segment served no other purpose, it seemed, than to creep out the audience with her Jesus-lovin’ comments.

[Clip of lightening strike behind the Ark]

PENNELLS: Have you ever had any doubts [about God]?

PENNELLS: What if you’re wrong?

All of that, however, was a prelude to the real reason we were eager to watch the segment: to see the full exchange with Bill Nye. We can now say the trailer we watched a few days ago was misleading, as we suspected and confirmed with Nye.

You might recall that the 40-second trailer featured Nye saying of Ham: “His followers think he’s the Messiah.” (Some commenters felt he said “a” Messiah.)

Ken Ham was immediately up in arms over the line, writing an angry blog post about Nye’s “incredibly blasphemous statement.” Ham didn’t know why the reporter was asking him if he was a Messiah, but once he saw the trailer, he felt Nye was to blame for planting that seed in Pennells’ mind.

We were quick to get a response from Nye regarding his quote; he stated that the exchange was actually him repeating what the reporter said, not him making the claim on his own.

Here’s how Nye said the exchange went down (we’ll use the phrase “the Messiah,” as we originally reported):

PENNELLS: His followers believe that he’s the Messiah.

NYE: His followers believe that he’s the Messiah?!?!?!

Here’s what aired in the full episode:

Given the broader context, it’s obvious that the editors of the trailer were being disingenuous for the sake of ratings. Not only did Nye not make the claim that Ham’s followers think he’s the Messiah, he disagreed with Pennells’ statement.

You can understand why the editors did this: If the trailer was accurate in portraying the segment as the 15-minute Ark Encounter commercial it was, nobody would have watched. Pennells, as the reporter, doesn’t deserve blame for this, but if he really is as fair-minded as he claims to be, he has an obligation to point out that the editors created a dishonest teaser that didn’t match what his reporting actually uncovered.

Nye went on to express disproval for Ken Ham in other ways, pointing out the damage the Creationist worldview has on young minds and criticizing the government officials who allowed this project to proceed with taxpayer funding.

NYE: Believe me, sir, I will claim that, if instead of the Ark Park, if it were the “Mosque Kiosk,” this stuff would not be happening. If there was a Muslim, strong religious believer trying to organize a Muslim faith-based ministry, the Kentucky government would have shut that down a long time ago based on traditional U.S. law.

Notably, Nye’s unrehearsed humor was his best. And that led to this exchange that was the highlight of the segment for us:

PENNELLS: You’re talking about one of our most successful exports.

NYE: Oh, uh, Australia’s most successful export, yeah… Well, you guys, well done that you got him off your shores.

Ark Encounter opens on July 7. We’ll be there with live updates.

May 23, 2016
Texas School Board Candidate Asked in Debate If He's "Christian Enough To Represent This District"
Next Post

May 23, 2016 Muslim Woman, Famous For Selfie Promoting Coexistence, Doesn't Want To Coexist With Jews
Browse Our Archives
What Are Your Thoughts?leave a comment