This Brilliant Meme Inspired Us to Reword the American Family Association’s Target Boycott Petition May 22, 2016 Tracey

This meme, posted by The Cafe, so perfectly calls out the true motivation behind the American Family Association’s boycott on Target over their gender-inclusive restrooms. 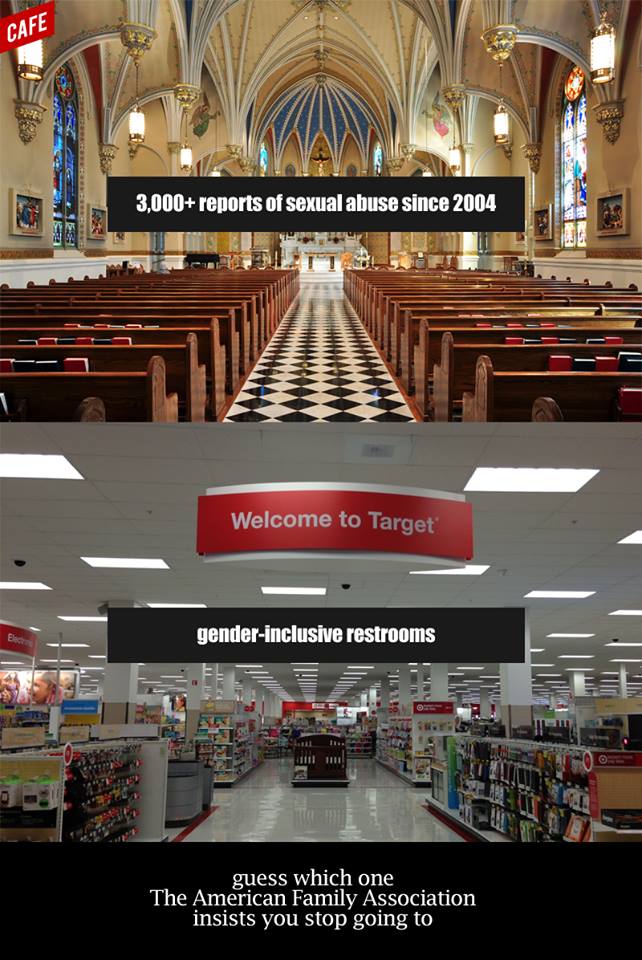 The AFA’s petition is nothing but bigotry masked in concern for women and children.

To demonstrate the discrepancy, let’s pull up AFA President Tim Wildmon‘s own explanation for the boycott:

Target’s policy is exactly how sexual predators get access to their victims. And with Target publicly boasting that men can enter women’s bathrooms, where do you think predators are going to go?

Clearly, Target’s new policy poses a danger to wives and daughters. We think many customers will agree. And we think the average Target customer is willing to pledge to boycott Target stores until it makes protecting women and children a priority.

One solution is a common-sense approach and a reasonable solution to the issue of transgendered customers: a unisex bathroom. Target should keep separate facilities for men and women, but for the trans community and for those who simply like using the bathroom alone, a single occupancy unisex bathroom option should be provided.

AFA urges all who think exposing others to danger is a bad idea to take action.

That’s a lot of concern over a place where sexual violations are sparse, and few, if any, involve trans people.

However, in The House of God, rape and molestation runs rampant. In the Catholic Church alone, there were over 3,400 reported cases of sexual abuse in a 10-year period, from 2004 to 2014. And that’s just what was reported.

With such an obvious threat to children, if the AFA was really interested in protecting children, the Boycott Pledge might look a little more like this:

The Church‘s policy is exactly how sexual predators get access to their victims. And with the Church publicly boasting that young, vulnerable, underprivileged children can spend private time around sexually repressed grown men of the cloth, where do you think predators are going to go?

One solution is a common-sense approach and a reasonable solution to the issue of Church workers molesting children: comprehensive sexual education and the liberation of human sexuality.

AFA urges all who think exposing others to danger is a bad idea to take action.

May 22, 2016
Creationist Ken Ham Promotes the Joke Book He Calls a Research Journal
Next Post