A senior Catholic cardinal said during the 12th Annual National Prayer Breakfast in Washington DC on Tuesday that transgender people are “demonic” and are causing the “death of God.”

Cardinal Robert Sarah, who holds the title of Prefect of the Cong Congregation for Divine Worship and the Discipline of the Sacraments, addressed lawmakers at the annual DC National Catholic Prayer Breakfast, according [to] Pink News. 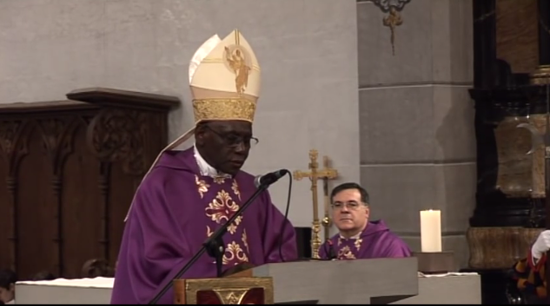 “The death of God results in the burial of good, beauty, love and truth. Good becomes evil, beauty is ugly, love becomes the satisfaction of sexual primal instincts, and truths are all relative,” Sarah said. “So all manner of immorality is not only accepted and tolerated today in advanced societies, but even promoted as a social good. The result is hostility to Christians, and, increasingly…

… religious persecution. Nowhere is this clearer than in the threat that societies are visiting on the family through a demonic gender ideology, a deadly impulse that is being experienced in a world increasingly cut off from God through ideological colonialism.”

So much for hating the sin but loving the sinner.

Let’s briefly unpack Sarah’s statement. He calls the idea that people, regardless of gender identity, are deserving of respect and dignity

But then he literally calls trans people devils and murderers, and that‘s not hostile at all; that’s just sharing God’s love.

And then, in an act of mind-bending chutzpah, he reminds everyone that words have meaning, and cautions us not to mistake hideousness for pulchritude.

It should be fairly obvious who, exactly, is confused about the meaning of words; and who, despite his mahvelous hat, revels in ugliness masquerading as beauty.

May 21, 2016
A Match Made in Hate-Heaven: Evangelical Leaders Want to Meet with Donald Trump
Next Post