Kim Davis: I Ignored the Supreme Court Decision Because “That’s Not a Law, That’s a Ruling” May 20, 2016 Hemant Mehta

Kim Davis: I Ignored the Supreme Court Decision Because “That’s Not a Law, That’s a Ruling”

Rowan County clerk Kim Davis, who made headlines last summer for denying marriage licenses to gay couples even after the Supreme Court had struck down bans on marriage equality, told D. James Kennedy Ministries President Frank Wright that she was absolutely justified in her actions.

That’s because, to her, the Supreme Court has no real authority: 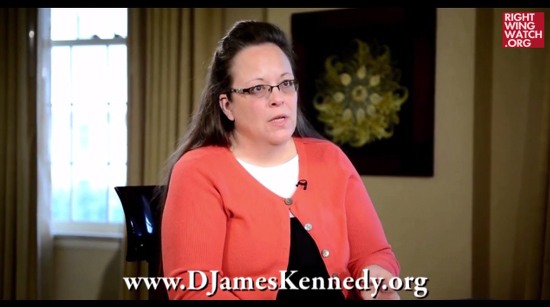 “I was obeying my law,” she insisted. “I had couples bring in the whole Supreme Court ruling and I said, ‘You know, I really don’t need to see this because that’s not a law, that’s a ruling‘ [and they’d say] ‘Well, why won’t you do this?’ And so then I go to the Bible and I’d tell them, [and they’d respond,] ‘Don’t be reading me the Bible.’ Well, you asked why I couldn’t issue you a marriage license and I’m explaining to you, I’m showing you why I cannot. They didn’t want to hear that though. They wanted to shove that paper down my throat and make me eat it for my dinner.“

Someone should explain Civics 101 to Davis. The Court’s ruling struck down a bad law. That’s what the Court can do. That’s why it’s so important.

On a brighter note, I guess this means the Hobby Lobby ruling is worthless and women can finally have access to birth control through their religious employers. And we don’t have to worry about the Court striking down abortion rights, since whatever they say is worthless.

All that matters is the Bible. And whatever Kim Davis thinks it says.

(via Right Wing Watch. Thanks to Jared for the link)

May 20, 2016
For Decades, This Christian Surgeon Raped His Way Through One Bangladesh Mission Hospital
Next Post