Allah must have blessed Iran with a culture that’s free of theft, rape, murder and other serious crimes. Why else would law enforcement officials instead go after models with uncovered tresses?

Iran has arrested eight people working for online modeling agencies deemed to be “un-Islamic,” the prosecutor of Tehran’s cybercrimes court has said. The arrests are part of an operation that has seen women targeted for posting photos showing them not wearing headscarves on Instagram and elsewhere. 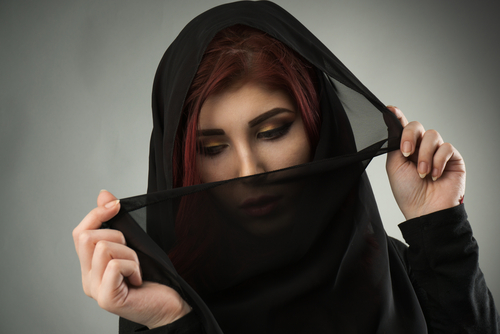 Those harlots! Time to teach them a lesson!

The eight unnamed people were among 170 identified by investigators as being involved in modeling online. They included 59 photographers and make-up artists, 58 models and 51 fashion salon managers and designers, according to a statement from the court. … Of the 170 people found to be involved in online modeling, 29 were warned that they were subject to criminal investigation, the prosecutor added.

The arrests were announced by the court’s prosecutor Javad Babaei during a state television program broadcast late on Sunday that focused on the “threats to morality and the foundation of family” posed by social media. Mr. Babaei claimed modeling agencies accounted for about 20% of posts on Instagram from Iran and that they had been “making and spreading immoral and un-Islamic culture and promiscuity.”

A spokesman of the Iranian Centre for Surveying and Combating Organized Cyber Crimes, Mostafa Alizadeh, said: “Sterilizing popular cyberspaces is on our agenda.”

“We carried out this plan in 2013 with Facebook, and now Instagram is the focus,” he added, saying fresh operations would begin in the coming days.

I’m sure a theocratic paradise awaits once all glimpses of human beauty are removed.

By way of comparison, this is what Iran looked like before 1979, when the fundies took over. Notice anything different?

May 20, 2016
Most Texans Are Gay, State's GOP Accidentally Alleges
Next Post

May 20, 2016 Atheist Benefactor Helps University of Miami Fund Chair for the Study of Atheism
Browse Our Archives
What Are Your Thoughts?leave a comment