Rep. Tulsi Gabbard, Democrat from Hawaii, Will Speak at the Reason Rally May 19, 2016 Hemant Mehta

Rep. Tulsi Gabbard, Democrat from Hawaii, Will Speak at the Reason Rally

Rep. Tulsi Gabbard (D-HI), who made news earlier this year for quitting her high-level position with the Democratic National Committee because she couldn’t remain neutral and wanted to publicly endorse Sen. Bernie Sanders, will be speaking at the Reason Rally next month. 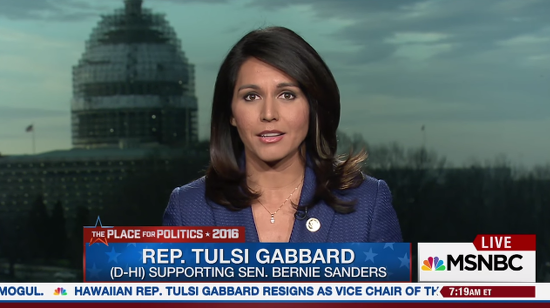 Gabbard, a twice-deployed combat veteran and rising star in the Democratic Party, will join Maryland congressional candidate (and current State Senator) Jamie Raskin at the event; they’re the only politicians — so far — to agree to speak to the atheist audience.

“I look forward to participating in the upcoming Reason Rally at the Lincoln Memorial on June 4th,” said Rep. Tulsi Gabbard (HI-02). “Freedom of religion, the freedom of each individual to follow or not follow any particular spiritual path, is the birthright of every one of us and it is wonderfully enshrined in our country’s constitution.”

It’s a wonderful sign that Gabbard, the only Hindu in Congress, and Raskin, who’s openly Jewish yet non-theistic, are willing to speak at the Rally. It sends an important message that separation of church and state is not just for those of us without religion; it’s good policy for the entire country.

May 19, 2016
Christian High School Says It Has the Right to Expel You if You Have a Gay Sibling at Home
Next Post