Rep. Richard Hudson Releases Campaign Ad All About How Awesome a Christian He Is May 19, 2016 Hemant Mehta

Rep. Richard Hudson Releases Campaign Ad All About How Awesome a Christian He Is

Rep. Richard Hudson (R-NC) is running for re-election this year — it would be his third term in Congress — but if you watch his new campaign ad, you’d be hard-pressed to find out what he’s accomplished or what policies he promotes.

All he does is talk about his faith. 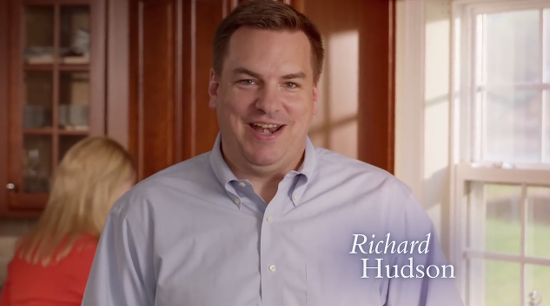 My little boy’s almost one year old. And I’m one proud daddy, but I worry about his future.

Popular culture today says Christianity should only be private.

Hollywood says, “No right or wrong” — anything goes.

I believe we have a higher calling: to be a rock, even when we’re surrounded by shifting sand.

My faith and my beliefs drive me, as a dad, and as your Congressman.

It’s an entire campaign based on the script for God’s Not Dead.

Because in a state where trans people can’t even go to the bathroom without Christians freaking out, why not just run on a platform of I Love Jesus More Than My Opponent?

(Thanks to Colin for the link)

May 19, 2016
House Democrats Introduce the "Do No Harm" Act, Hoping to Correct the Overreach of RFRA
Next Post

May 19, 2016 Christian Missionary Sexually Abused Eight Orphans in Malawi For More Than a Dozen Years
Browse Our Archives
What Are Your Thoughts?leave a comment