Pastor Mark Driscoll to Young Woman: Your Anorexia Was Caused By the Devil May 18, 2016 Hemant Mehta

Pastor Mark Driscoll to Young Woman: Your Anorexia Was Caused By the Devil

Pastor Mark Driscoll is back to his old tricks, saying indefensible things that any decent person ought to reject.

The former pastor of Mars Hill Church in Seattle, now starting up Trinity Church in Phoenix, was asked by a viewer whether anorexia was a sin. 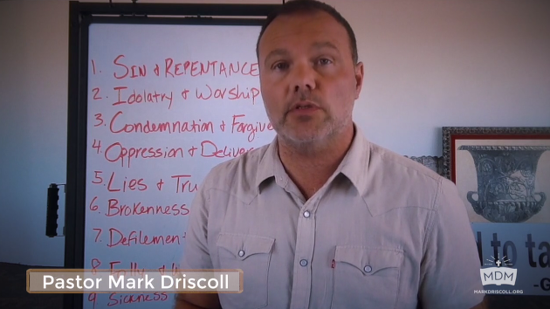 Driscoll never suggested seeking professional help. Instead, he said anorexia was the work of the Devil.

My colleague Warren Throckmorton has the relevant portion of the transcript:

This is where Satan, demons are lying to you, tempting you. The Bible says that Satan is the accuser of the children of God. He accuses them day and night — in Revelation 12:10, there are accusations. If you start realizing this oppression, you can get out of it by acknowledging what God has to say. Oppression, often times, an accusation, is often in the second person, you are unlovable, you need to punish yourself, you don’t appear attractive, whatever the oppression is, it’s telling you something that’s just not true.

And so, what you need to understand is that’s demonic, that God doesn’t speak to you that way, and if you’re hearing in the second person, maybe someone is talking to you, a spiritual being is lying to you, and I’ll get to that in just a moment, and the way out is deliverance, you have victory in Christ, Colossians 2 says He has disarmed and defeated the powers and principalities of evil, triumphing over them through his victorious forgiveness of sinners on the cross.

It’s something you’re never find in a therapist’s textbook: Satan causes anorexia and Jesus cures it.

It’s bad advice, not just because many devout followers of Jesus suffer from the disorder, but because what this young woman needs is psychological help. She needs to understand the root cause of her illness so she can begin to really treat it. Prayer won’t be enough.

Near the end of the video, Driscoll suggests this may be a medical problem (adding “I’m no physician”), but he never offers the woman competent advice or a suggestion for who to talk to. At the very least, she can call the National Eating Disorders Association hotline at 1-800-931-2237. And I hope she sees a professional.

It won’t be easy, but there are ways to overcome the problem and not let it control you.

And after she’s done with Driscoll, there are ways to overcome anorexia, too.

May 18, 2016
After Eight Years As a Fugitive, Former Youth Pastor Faces the Music For Child Rape
Next Post