While we’re posting about Christian pastors who lie during their sermons, here’s another candidate from Alabama. 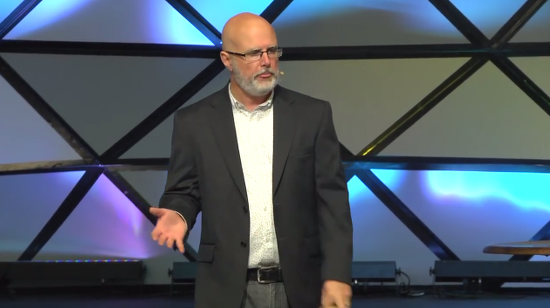 After talking about how separation of church and state isn’t a real thing (we have “freedom of religion, not freedom from religion”), he starts this part of the story by telling the crowd that trans men don’t even exist.

I don’t know a single woman who identifies herself as a man who wants to go in and use a man’s bathroom. It always is the other way around.

That tells you how uncomfortable the pastor makes trans people feel and how small his circle of friends is, not that trans men are a figment of our imagination. They don’t want to come out to him because they know he’ll judge them. I don’t blame them.

That leads into his story about what a trans woman did. To someone. Somewhere. (You have to believe him because this totally happened to a friend of a friend.)

A friend of mine in Texas, somebody that they know, they went into the local Target just this past week. This lady went into Target with her daughter, and when they came out of the stall, there was a man in there, leaning against a wall, just watching them.

And she said, “What are you doing in here? You need to leave!”

And she went to the service desk… they said, “well, we can’t question him, because we might offend him.”

If that happened, every Religious Right leader in the country would be screaming that story from the rooftops.

And you know what? Even if it did happen, it wouldn’t prove trans people are pedophiles or creeps, only that one guy used that as an excuse. Maybe he got the idea from Mike Huckabee.

More importantly, the Target staff could absolutely have done something about it. If their customers are being harassed by someone in the store, they can call the cops, they can kick the offender out, they can file a police report, they can do everything you’d expect if this were an actual man staring at women in the ladies’ room.

Criminal acts are still criminal. Trans people using the appropriate bathrooms doesn’t give them a right to harass other people. And I have yet to hear a credible story about an actual trans person bothering people in a bathroom. They want to pee when nature calls. That’s about it.

That’s a long rant for a story I don’t even believe happened.

Prove me wrong, pastor. Give me details. Tell me the name of your friend (and that person’s friend). Tell me which Target store this took place at so I can call them up and verify the story.

Until then, this is just another example of a pastor lying on behalf of Jesus, scaring his ignorant, gullible congregation so that they’ll do everything in their power to deny trans people their civil rights.

May 18, 2016
Conservative Radio Host Rick Wiles Says Obama and Satan Are Going To "Rape Your Children"
Next Post

May 18, 2016 This Christian is Selling Child-Beating Sticks (But He Doesn't Want the Internet to Find Out)
Browse Our Archives
What Are Your Thoughts?leave a comment