What Do You Do When Your Old Friend Is Now a Christian Who Screampreaches Inside Target Stores? May 17, 2016 Hemant Mehta

What Do You Do When Your Old Friend Is Now a Christian Who Screampreaches Inside Target Stores?

Yesterday, Terry posted a video of a woman who, with her husband and twelve children, marched through a Target store screaming about the problems with their transgender-friendly bathroom policy.

I bring it up again because that video included this guy at the 0:16 mark: 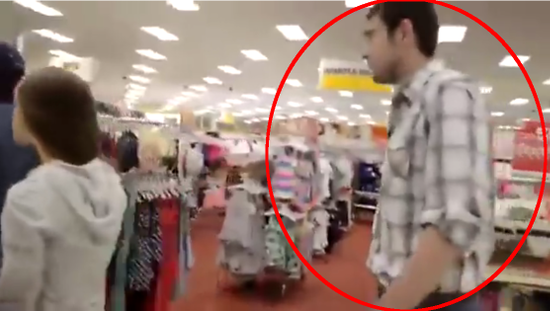 That guy’s presence came as a surprise to atheist blogger Matt Young, who watched the clip just like everyone else, only to do a double take when he saw the familiar-looking face:

The man in the video (I’ll call him Aaron) was my best man in our wedding four years ago. The others in the video are his new in-laws.

We grew up together. My wife has known him since they were eight years old. I met him in our early teens. Back then, we were both homeschooled, conservative, Evangelical Christians. My family soon started attending the same “house-church” as his family, and we started to spend lots of time together.

They obviously went down different paths.

What did Matt think of seeing his old friend?

… [it] makes me very sad. We both started in relatively similar circumstances. But while I was lucky enough to escape the clutches of religion, Aaron was pulled deeper into its deranged vision of the world — a vision that sees everyone not in one’s tribe as evil, depraved, and the harbingers of the coming judgement.

It must have been weird… but I imagine a lot of you grew up with friends who later became religious zealots. Maybe you see it through their Facebook postings. Maybe it comes through in their conversations with you. Whatever it is, feel free to share those stories in the comments.

May 17, 2016
Christian Activist in Arkansas Wants to Lynch Mayors and Unleash a Civil War For Jesus
Next Post